The Citizen Potawatomi Indian Child Welfare Department has one of the toughest challenges in Indian Country, providing services and interventions on behalf of some of the Tribe’s most in-need citizens. The department’s trials are outmatched by the determination of the staff, a core group of individuals who deal with families and Tribal citizens on some of their worst days. Heading up the Family Preservation Program is Desiree Coffey, whose dedication to others stems back to her formative years.

Coffey’s own mother was adopted, having six brothers and sisters separated and processed through the foster care system.

“Her family and siblings were negatively impacted by the lack of counseling services that just weren’t available back then,” explained Coffey. “I have always felt that if I could learn how to provide those kinds of services for someone else, to help them overcome what they’ve been through in order to help themselves, they’d turn out much better and be self-sustaining individuals.” 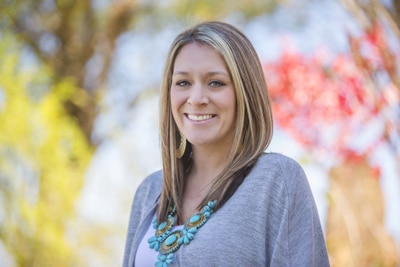 “I didn’t know what I wanted to do, going back and forth between social work and criminal justice,” Coffey admitted. “I wanted to be a crime scene investigator, work for the FBI, but by the time I got to East Central I realized I didn’t think I’d make a great cop.”

With a minor in psychology and a concentration in juvenile justice, Coffey found herself doing an internship at Citizen Potawatomi Nation Indian Child Welfare Department. Coffey spent her internship on the front lines of the department’s work with ICW Supervisor Laurie Clark, shadowing her on day-to-day tasks like intakes, meeting with families, court cases and home visits.

“It was really hard for me, because even though I thought I had seen a lot, going into this kind of work, it’s a whole different world. I’m a firm believer in going to college, but everything I have learned in this job has come from my time in our office,” said Coffey.

Coffey’s approach to her work in her former position as a case manager and currently as the head of the Family Preservation Program comes from a point of understanding. While the decisions that lead many of her clients to require the supervision of the ICW Department aren’t ones that would be considered “normal,” Coffey keeps a perspective that not everyone had the benefit of the same upbringing.

“A lot of people weren’t taught how to clean a house, how to pay a bill with a check or how to call and make a doctor’s appointment. You have to approach those situations with empathy because they just don’t know and having someone show them how to do it, it’s a big deal to them.”

The scourge of methamphetamine use is a common theme with many of the cases that come across Coffey’s desk. In her time with CPN, Coffey notes an uptick in families impacted by mental health issues, specifically with non-Indian fathers becoming involved with Potawatomi mothers who are disabled and receiving governmental housing and income assistance.

Coffey now oversees the Family Preservation Program after taking over from longtime employee Jackie Davis after she retired.

“Having an employee like Desiree means a lot to the success of this department,” said FireLodge Children and Family Services Director Janet Draper. “She assists with clients who have lost custody of their children or are in the process of having the children placed back into the home. Family preservation is as simple as the title. Having the right person in this position assures the ICW staff that our clients will be on the right road to become and stay successful parents.”

Throwing a large binder titled ‘Partners in Parenting’ with an audible thud, Coffey aims to make her clients self-sufficient by providing as much advice as possible in a wide range of areas, from mock job interviews, parenting classes or family planning.

“Once the parents go from that addict stage, where they were their kids’ buddy instead of their parent, it’s a difficult transition. We work with them to help them see the ways they can correct that perspective. It’s definitely hard, but I tell the families that come in here that I’m a mom too and I’ll give them examples in my own life that work and didn’t.”

While the point of her program is to give back to those who need it, Coffey is emphatic that she and her fellow ICW staff don’t give handouts.

Now a few years in to her work with CPN, she notes that while the work is challenging and often times frustrating, she has no plans giving up on the causes she’s worked on in recent years.

“It’s hard to watch, because we see a lot of the same families that I started with four years ago or even those who Janet (Draper) worked with more than a decade ago,” said Coffey. “You come into it because you want to make a difference and hope that you are. As a team, it’s hard to see these people struggle. I wouldn’t work for any other ICW department though. Hands down I work with the best ladies and gentleman. We’re like family, and we don’t always agree, but we always have each other’s backs and help one another and our families.”

If you would like to learn more about the services of the CPN Indian ChildWelfare Department, please visit
cpn.news/ICW1512.