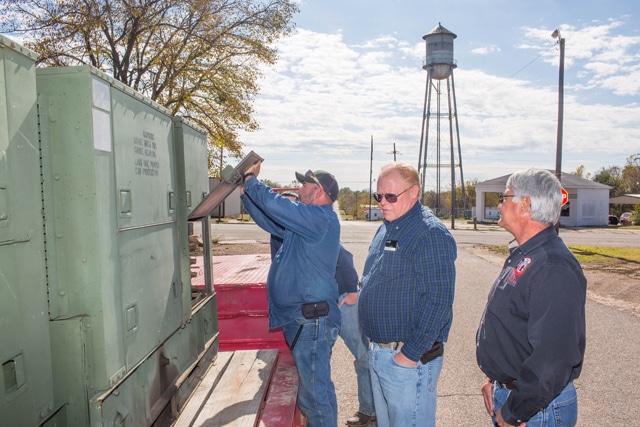 Tribal Housekeeping and Emergency Management Director Tim Zientek gets a regular stream of requests for donations from fellow first responders and city officials from communities across the tribal jurisdiction in Pottawatomie County.

Cash and resource strapped municipal governments across the county rely on partnerships with fellow agencies to help provide basic services that state and federal agencies are unable to. One recent call came in from the town of Maud, with Zientek fielding a request from the city’s emergency manager concerning the availability of surplus generators. The small community of just more than 1,000 located on the border of Pottawatomie and Seminole counties was looking to mitigate the impact of Oklahoma’s most onerous winter weather phenomena; ice storms.

“We need to be able to run our water wells and sewer lift stations in the event of a power outage,” explained Maud Emergency Manager David Zeller. “Our major concerns are winter storms, where we could potentially lose power for an extended period of time of more than two or three days.”

Zeller estimates that the city would otherwise have had to spend around $60,000 to purchase the  generators that the small Pottawatomie County community just wouldn’t be able to afford.

“We would have had a hard time with our budgets to be able to afford these without the help from CPN. These generators, if we had to go buy them on the commercial market, they would be $15,000 a piece,” said Zeller.

“Because of the number of tribal members that live in the Maud area, I made the request on behalf of the City of Maud to Vice-Chairman Linda Capps and received the go ahead to pursue the request,” explained Zientek. “The Nation was able to acquire the needed generators for the city. I am thankful that we were able to acquire the resources to ensure the critical needs will be met for the citizens of Maud.”

For his part, Zeller, who serves as emergency manager and city clerk, is happy that should this winter’s storms prove harmful to the city’s electrical infrastructure, the tools are there to keep the water flowing.

“I just want to thank the CPN for doing it for us,” concluded Zeller.

CPN and Maud have partnered together in the past, with the Tribe donating $8,000 in January 2015 to the city’s emergency management department that was used to upgrade its radio equipment.