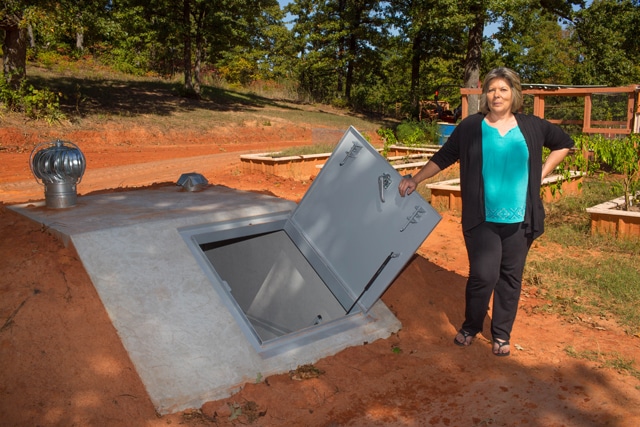 In May 2013, a series of deadly tornadoes ripped through parts of Oklahoma leaving behind paths of destruction in their wake. The Citizen Potawatomi Nation was hit hard. Steelman Estates, a trailer park lying inside the Tribal jurisdiction approximately one mile south of the Grand Casino Hotel Resort took a direct hit, with numerous injuries and two deaths from one tornado.

Other areas like Pink and Little Axe, home to Tribal members and employees alike, also suffered damage from the twisters.

In an effort to mitigate the impact of the most extreme kinds of severe weather that are all too common in Oklahoma, Citizen Potawatomi Nation partnered with the American Red Cross to fund a limited number of residential storm shelters for Tribal members, residing in Oklahoma, Cleveland and Pottawatomie counties.

“As the emergency manager for the Nation, one of my responsibilities is to mitigate hazards to the resources of the Nation, including cultural resources. One of our greatest resources are our elders, and I am very happy we were able to help them gain security from the storms,” said Tim Zientek. “We were very fortunate to have such a great relationship with our American Red Cross partner.”

“Our partnership with the CPN Community and all of Indian Country is extremely valuable. In addition to the storm shelter program, we also partner in disaster response, resiliency efforts and training efforts. The storm shelters are the product of two years of hard work and partnership efforts,” said Chele Rider, Disaster State Relations Director.

Harrah, Oklahoma resident and Tribal member Cynthia Davis read about the program in the Hownikan and saw an opportunity to gain a sense of security that Oklahoma spring weather often denied her.

“I was very happy about it, because of the storm damage we’d received in the past,” said Davis as she stood outside of her home in rural Harrah. “We live on a fixed income, me and my husband. We’ve both been retired for a couple years and had never been able to afford a storm shelter, so it was awesome that they were able to help us out.”

After filling out the application, Davis was contacted by CPN Tribal employee Kelley Francen, who was then in charge of the storm shelter grant program’s administration. The program provided a FEMA-approved shelter and installation assistance funds for the storm shelters which were constructed and installed by TornadoSafe, a company based out of Oklahoma City.

“It was awesome. We spoke with Kelley and then TornadoSafe called us. They came out and were really professional and put it in. It was as easy as it could be. It gave us a big sense of security that it’s here. We may never need it, but just in case we do.”

Though the funding was exhausted quickly by selected applicants, the program’s success shows with stories like Davis’.

“I just feel like it was great to have the CPN partner with the American Red Cross to help people. I was fortunate to get on the list and get the security of having a storm shelter, something I’ve wanted forever.”

For its part, the Red Cross says that services and partnerships with CPN are just part of its responsibility to the people of Oklahoma.

“One of our highest priorities is to empower Oklahoma families to increase their preparedness with education, training and service programs,” stated Regional Disaster Officer James Tittle. “The shelters will provide additional safety and peace of mind to families, adding to the recovery of the community at large.”