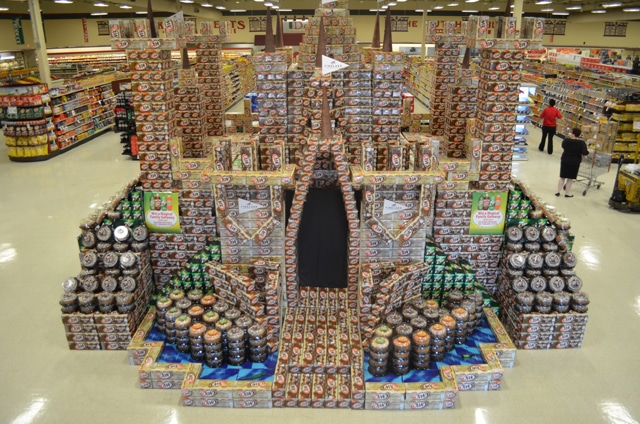 FireLake Discount Foods was awarded $2,500 for its third place finish in a national display contest. The contest was created by Café Valley, nationwide bakery distributor which produces high quality cakes, muffins and croissants for stores throughout the world.

“I came here to present FireLake Discount Foods the check for their outstanding display,” said Central Regional Sales Manager for Café Valley, Stacy Seaba. “Winning third place is a huge accomplishment considering the contest had more than 300 displays submitted from 30 different states. It’s a great contest that adds value to the stores and Firelake Discount Foods did an outstanding job with theirs.”

“We had a group of employee’s get together with some of the soda vendors and they started brainstorming what display we wanted to create,” said FireLake Discount Foods store manager Mike Lester. “A lot of ideas were discussed and we ended up building a castle.”

“It meant a lot to us to enter a competition that’s nationwide,” said Lester. “Affiliated Foods, who is the vendor for the cakes gave us a lot of support and Dr Pepper Snapple Group supplied the pops for the display, which took it over the top.”

Lester continued, “it was an honor to win a national award that was not a only representation of what  we’re doing at the store level but also the partnership we have with our vendors.”