Oklahoma’s military veterans need to know their service and sacrifices are recognized, which is in part why in 2012 the state legislature approved a plan to identify them with a small American flag and ‘veteran’ insignia on all state-issued IDs. However, word of the designation has been slow to filter out despite being in effect for more than four years. One Oklahoma veteran who helped spearhead the initial effort has continued to promote the initiative.

Air Force Maj. Gen. Rita Aragon stopped by the Citizen Potawatomi Nation Cultural Heritage Center’s Wall of Honor memorial in August to film her version of the “Thank a Vet Challenge” on social media. The initiative pushes for Americans, both military and civilian alike, to express gratitude for the service of veterans of the past, present and future. One of the more popular aspects is individuals filming videos thanking veterans for their time in uniform, which Aragon used to encourage Oklahoma veterans to get the designation on their state-issued ID.

“It’s important that we all thank veterans, so I challenge you, do it today,” she said. 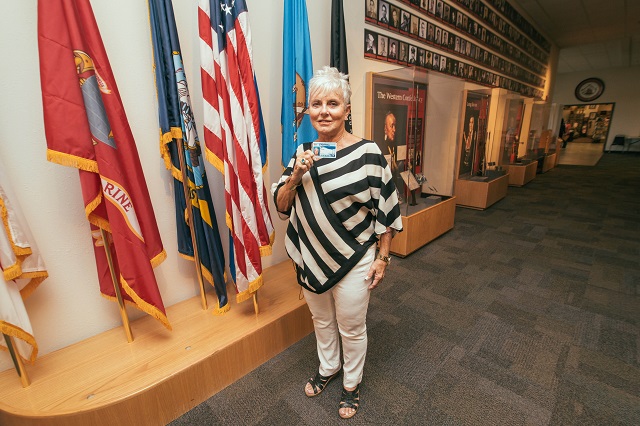 Since 2012, Oklahoma veterans have been able to obtain driver’s licenses and ID cards as part of a state effort to curb fraud against businesses and services offering discounts to military vets. While the ID card program has been in effect for some time, little has been done in the way of promoting the issue in the years since its inception.

Citizen Potawatomi Community Development Corporation Director Shane Jett was speaking to Aragon at lunch recently when she brought up the topic and its lack of publicity. Jett, who joined the U.S. Navy Reserve as an officer during his time serving in the Oklahoma Statehouse, suggested that they partner with CPN’s Cultural Heritage Center to film a public service announcement that could be shared online.

“We were having lunch and within two hours, we were pulling out of the cultural heritage center having filmed it with the CPN’s Tribal Heritage Productions staff,” explained Jett.

The video was filmed in front of the CHC’s Veterans Wall of Honor exhibit, which venerates the service of all Citizen Potawatomi Nation military veterans going back to the 19th century. Following the major general’s filming of her challenge to Oklahoma veterans to get the ID, Jett stepped in front of the camera for his own.

“Veterans, you’re out there, you served this great country,” said Jett. “You have a right to go to your local tag agency here in Oklahoma and get your veteran ID driver’s license. Show your pride and receive the thanks of a grateful state.”

For service veterans of the U.S. Armed Forces who want the ‘veteran’ icon added to their state issued driver’s license or ID card, take military discharge paperwork to a local tag agency. The designation is open to anyone actively serving or honorably discharged from any branch of the military.