Observing our seasonal moons, many Potawatomi communities regard November as Bbongises [Snow Moon]. During this moon, Potawatomi and other Great Lakes tribes play a centuries old sport called Zhoshke’nayabo or Snowsnake. Typically played by men and boys, snowsnake is not only for amusement, but for spiritual and therapeutic means. It is thought that the comradery amongst players remedies the sick. Games can last for several hours and are played by teams of four, each equipped with a spear-like implement called a zhoshke’nayabo. Carved from local hardwoods and polished smooth, zhoshke’nayabo range from two to seven feet in length and one inch in diameter. The object of the game is for each competitor to hurl their zhoshke’nayabo, down an icy track, farther than their opponent. When thrown, the zhoshke’nayabo is thought to resemble a snake slithering, hence the name snowsnake. The team with the longest cumulative distance wins. Snowsnakes have been recorded at speeds in excess of 100 mph and travelling more than a mile. 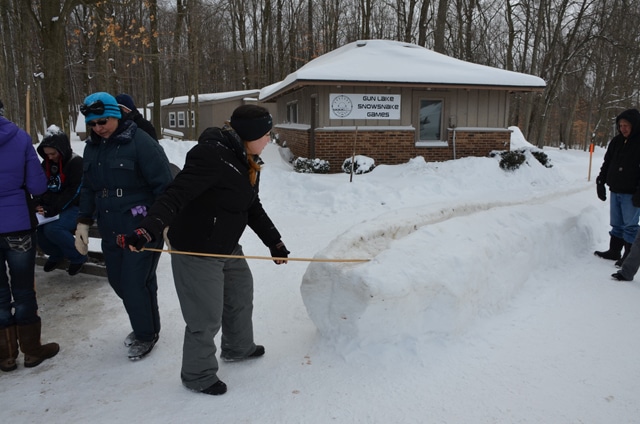