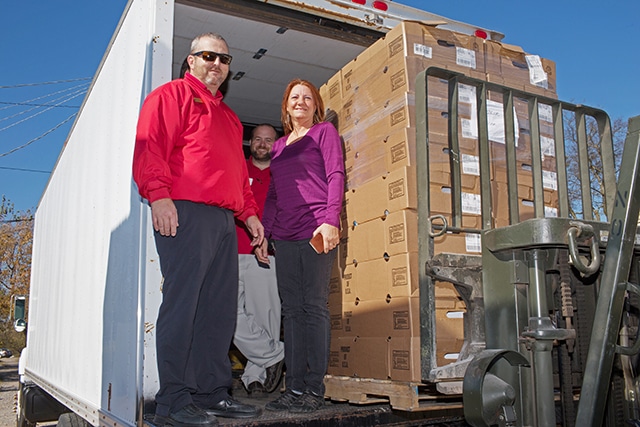 Hundreds lined up along Gordon Cooper Drive to collect free Thanksgiving turkeys and meals from the Shawnee Rescue Mission. Looking out at the long line of patrons waiting patiently to collect groceries, Shawnee Rescue Mission Director Glenn Blankenship explained that with Thanksgiving falling at end of the month, many of those in line have already used their food stamp allotment for the month.

“The majority of the people that come here are not what you would expect,” said Blankenship. “It is senior citizens, people on fixed or reduced incomes, it’s the working poor, families with children who are working but just don’t make enough to make ends meet.”

Shannon Rivard, a Shawnee resident, said that the Shawnee Rescue Mission’s Thanksgiving turkey donation was the difference between having a holiday meal and not.

“Considering that I live on a limited monthly income, I’m very grateful. They’ve helped me out a lot in the past year,” she said.

“Because of the help of the Citizen Potawatomi Nation and FireLake, we are able to partner and help these families in need,” said Blankenship. “We’re very grateful that, again this year, the tribe has helped out with the impoverished in the community.”

Sarah Inselman, who is the food pantry coordinator for the Shawnee Rescue Mission, noted that FireLake Discount Foods donated 175 Thanksgiving turkeys free of charge while offering a discounted rate on the others purchased by the Rescue Mission.

“The people using the mission, many of them are hardworking people with families and friends just like the rest of us. They’re just trying to put food on the table. We at CPN and FireLake are just happy we can help do that in this season of giving,” said FireLake Discount Foods Director Richard Driskell.

“We’re expecting more than 800-1,000 people out here, so without their help and assistance, we would not be able to provide turkeys to the people in the community who so desperately need them,” explained Inselman.

The Shawnee Rescue Mission and its food pantry service are a non-profit organization serving anyone in the community that needs help in affording groceries.

“I think it means the world to them,” said Inselman of the turkey donations. “A lot of these people would not be able to go home and prepare a meal with their family without the support of the free grocery store. To be able to take a turkey out of the oven, it’s just the icing on the cake.”