It finally happened. The Vietnam-era CPN Veterans Banquet was well attended on 26 September 2015 at the Grand Casino Hotel Resort in Shawnee, Oklahoma. Treasurer David Barrett was our master of ceremonies, and he did a masterful job. Tribal Chairman John A. Barrett Vice-Chairman Linda Capps addressed the veterans being honored, with the vice-chairman giving a heartfelt thanks to the men and women who served our country during
a very difficult time in its history. 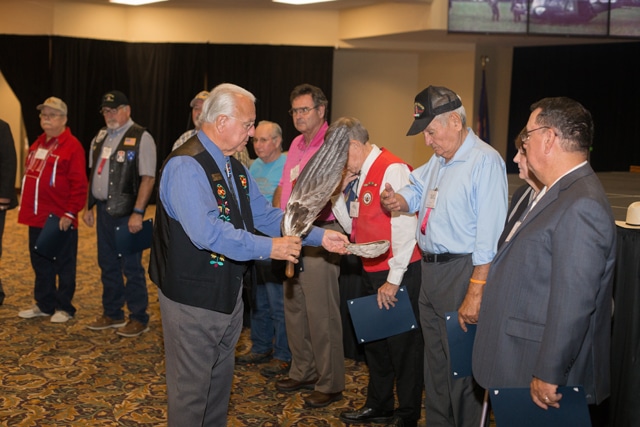 Chairman Barrett offered his thanks and presented a certificate to each veteran on behalf of the Citizen Potawatomi Nation for their service to our country and our countrymen. He also gave a very special presentation, gifting an eagle feather to each of the Tribal Veterans in attendance and a Red-tailed Hawk feather to the veteran spouses.

The banquet also recognized the attending veterans of World War II and the Korean War. The colors and eagle
staff were presented by me, David Barrett, the Treasurer; Bill Wano, the Secretary and Herb Holton, the Color Guard and Honor Guard Team Leader. Connie Barrett sang the National Anthem and the popular song, “Proud to be an American.”

Curtis Grant had prepared a special video on the Vietnam War and our special guest speaker was CPN Veteran and
author, Robert Sander. We had a lot of support from the CPN, the Tribal chairman and vice-chairman, the Grand Casino and several sponsors to make this event so very special. Migwetch.

To see the photos from the CPN Vietnam Veterans Banquet, click here.

Our next get together will be 8 December in the South Reunion Hall at 5 p.m. at the Potawatomi Powwow Grounds. It will be our annual Thanksgiving/Christmas Dinner.

Happy Thanksgiving and Merry Christmas from the CPN Veterans Organization. 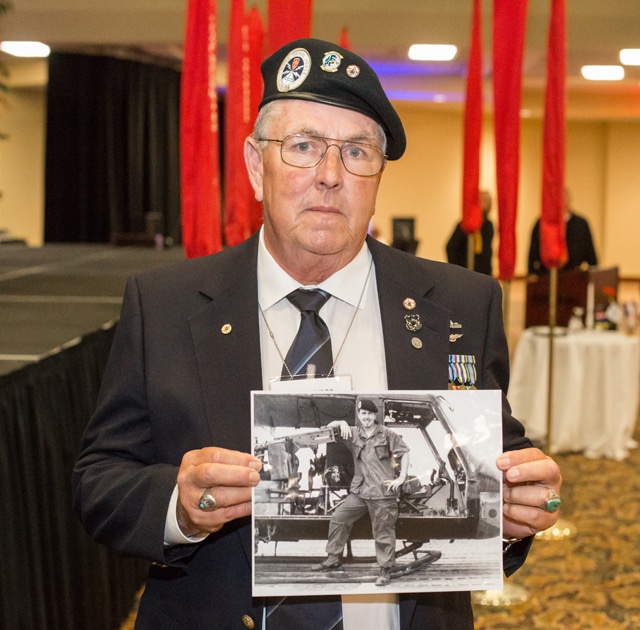