FireLake Wellness Center‘s annual fitness competition, called March Madness for the month it begins, was again a huge success. In its seventh year running, the fitness competition is a 64-individual tournament where wellness center attendees compete against one another in cardio workouts.

“This is a contest that we do annually and people get excited about it every year,” said CPN Wellness Center fitness trainer, Sarah Lawerance. “It’s a great way to get people in the gym, to continue or develop good workout and healthy living habits.”

The 64 participants compete against an opponent for one week to see who can accrue the most miles on the treadmill, stationary bike or elliptical machine. Those with the largest total by the end of the week advance to the next round. 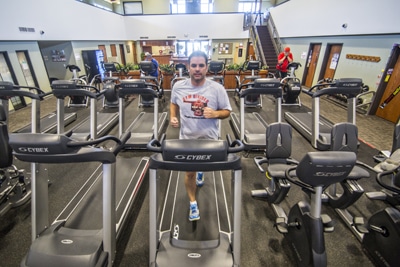 Participants are separated into two brackets based on their age, with a 39 and younger division and a 40 years and older division. The winners of each bracket competed against each other for the championship.

This year 2015 March Madnesschampion Cheyenne Deathrage vied with Chris Jolley for the championship. Deathrage completed a total of 83.49 miles compared to Jolley’s 77.78 miles,  giving the reigning champion the title for the second consecutive year.

Third place finisher Brian Yort totaled 55.26 miles and fourth place went to Tracey Cawvey with a total of 54.26 miles. The winners received Lowes gift cards and were placed into a
drawing to win a fire pit. Those who made it to the sweet sixteen won a shirt.

“It’s awesome being a part of a competition that people love. As a trainer knowing the overall health benefits they are receiving from competing is rewarding,” said Lawerance. “I really enjoy being a part of March Madness and look forward to it every year.”