To succeed in the art world, artists must continuously draw inspiration to fuel their passion. The famed Potawatomi artist, Woody Crumbo, lived in the desert hills of New Mexico and drew inspiration from the environment around him. In almost similar fashion, fellow CPN Tribal member Matt Bearden, explains that growing up on the Osage Plains in Hominy, Okla. is what gave him his passion to create Native American art. 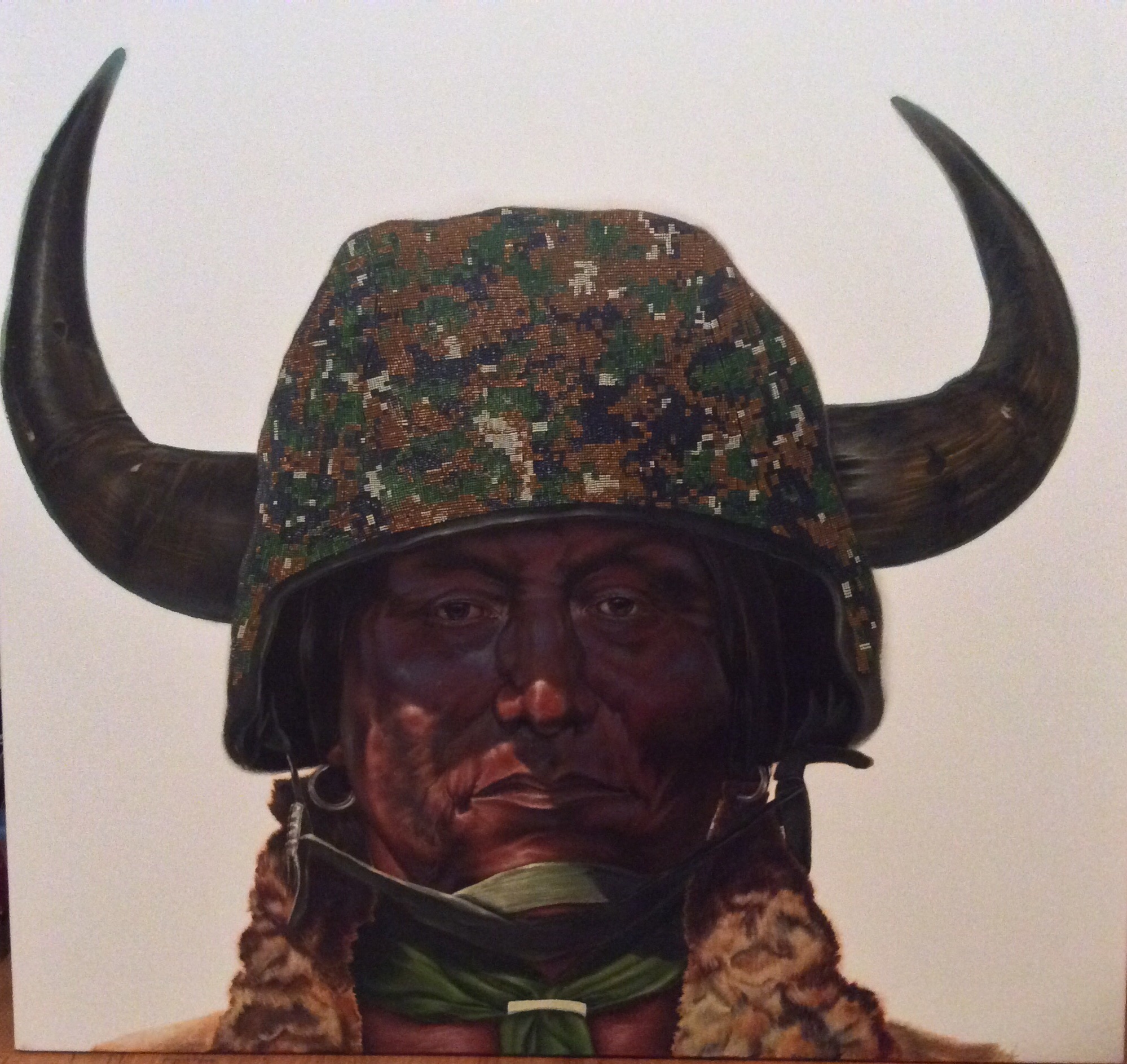 “I’m one of those guys that used to always draw and doodle all the time,” said Bearden. “My senior year in high school, the school asked me to draw the mascot for the yearbook cover. The mascot for Hominy is an Osage Brave, so doing that is what essentially got me into Native American subject matter.”

The descendant from the Bruno, Vieux and Rhodd families currently lives in Tulsa, Okla. with his wife and three children. Bearden graduated from Hominy High School in 1987 and chose to pursue graphic design at Northeastern Oklahoma State University in Tahlequah, Okla. After graduating, his friend suggested that he apply to the Institute of American Indian Art in Santa Fe, N.M.

“The best part about attending IA was being around all of the kids from tribes all over the nation,” said Bearden. “It’s a great firsthand experience on understanding what it is to be a Native American, whether you delve into traditional Native American art or not.” 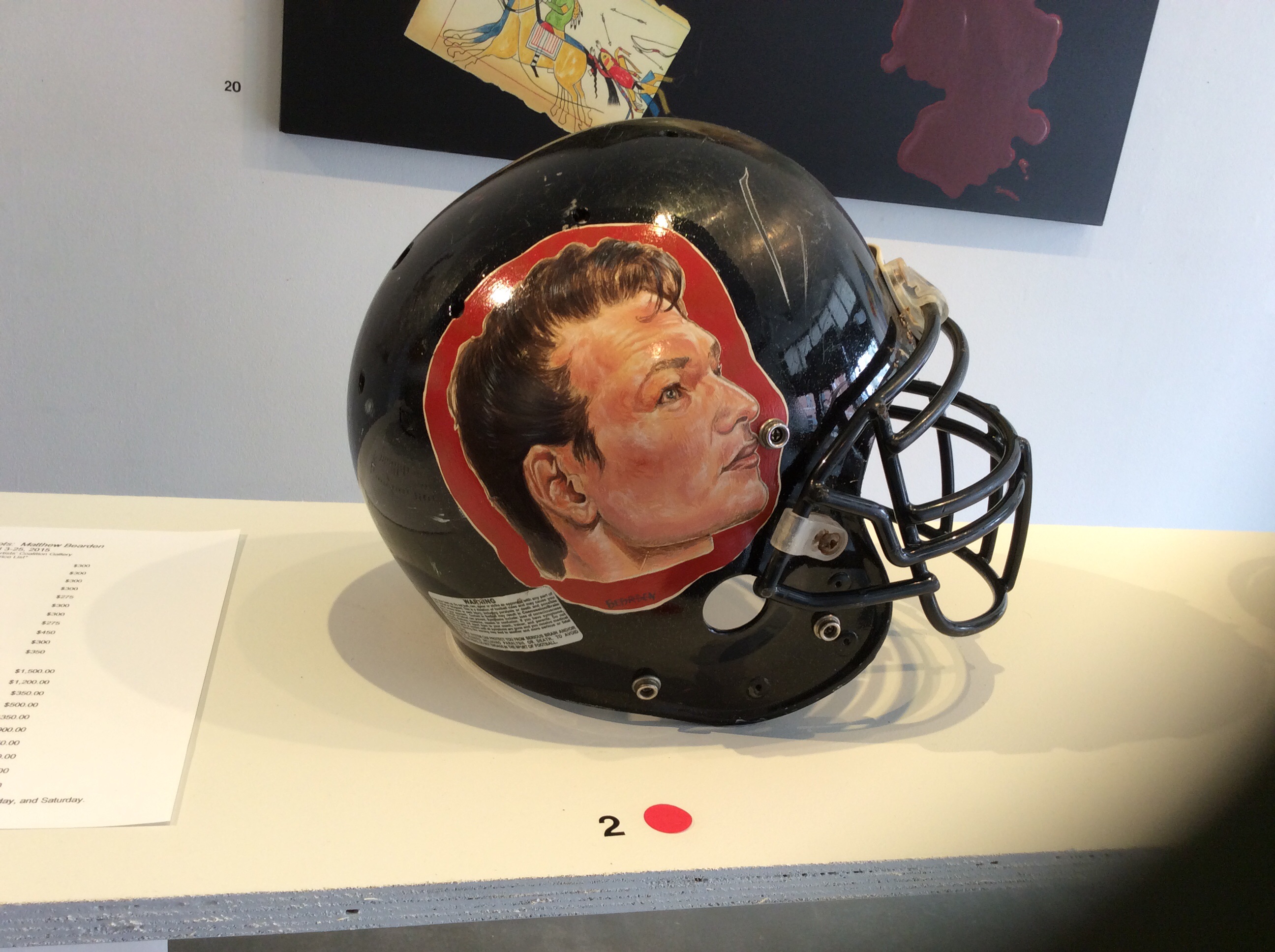 Recently Bearden began a project called “Sacred Mascots.” The project was on display at the Tulsa Artists’ Coalition Gallery in the well-known Brady Arts District. “I was explaining to my wife how some well-known mascots can be seen as offensive to Native Americans,” said Bearden. “Within that conversation I made an analogy to what it would be like to have a high ranking religious authority on a football helmet and how that could offend someone of that religion. It was from that conversation where my idea for ‘Sacred Mascots’ came from.”

The artist acquired used footballhelmets and created satirical mascots and painted them on the helmets. His ideas for each one ranged from Patrick Swayze to cigarettes in the shape of a cross. Besides making satirical art, Bearden recently was commissioned to paint a historical mural for Schlumberger Oilfield Services in Kellyville, Okla. Currently he is preparing for a show at the Oklahoma State Capitol in 2016. The Oklahoma Supreme Court houses one of his pieces in their permanent art collection and he has won numerous art awards over the years.

“I’ve been doing art professionally, but not full time since 1995. I was burnt out working so much but not doing art that I decided to pursue my  art career full time,” said Bearden. “For the past year and a half I’ve been a working artist and I’m looking to connect with my Tribe more and more as I go on this journey.”

Bearden is constantly working on new projects and recently finished several works in the past few months. Bearden is taking special commission for people wanting their own “Sacred Mascot” helmet. For inquiries about a commissioned piece or for more information about Matt Bearden, please email him at mattbearden@juno.com. To see more of Bearden’s work please visit his Facebook page.