The scale and scope of issues plaguing the VA, well known for decades by military members caught up in the often confusing and arbitrary bureaucracy, was widely publicized in 2014. The resulting outcry forced then VA Secretary Eric K. Shinseki to resign and a renewed push to reform the beleaguered administration responsible for the care of American servicemen and
women.

“I can’t say we’ve made a lot of progress. The problems we’re seeing now are very similar to what they were five years ago,” said Clyde Yates, the CPN Tribal Veterans Representative with the U.S. Department of Veterans Affairs.

Yates, who had his own battles with he administration for coverage of health complications arising from his service during Vietnam, has been trained by the VA to specifically bring Native American veterans in from the cold. Despite his sobering assessment of the progress made by the VA in his five years as a TVR, the work of Yates and those like him have had some positive impacts.

Yates was recently honored by the Governor of Montana during a ceremony  honoring that state’s tribal veterans.

“Montana is grateful for the work of the Tribal Veterans Representatives that help tribal veterans access their benefits, and provides information, outreach and assistance to veterans
and their families,” wrote Governor Steve Bullock in a letter to the ceremony’s attendees.

Though Yates is a Potawatomi, he travels north to Montana, Idaho and the Dakotas a few times a year to offer his advice and experience. 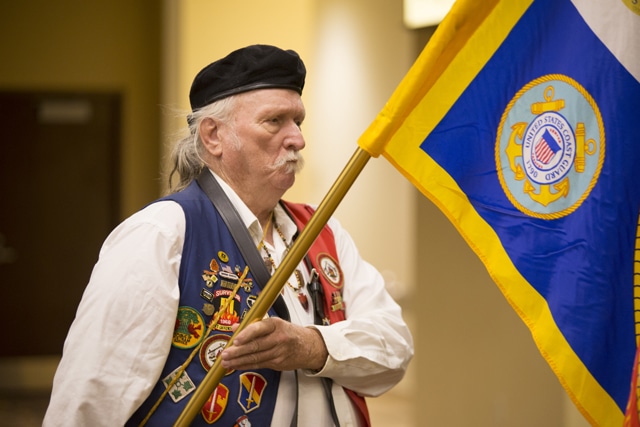 “Crows, Flat Heads, Lakota Sioux and even Alaska Natives, I’ve worked with them all to get their own TVRs,” said Yates. “To have their own people, fellow warriors, who know their customs and who they trust; it is where we have made some progress.”

notes that the biggest challenges that Native American veterans face in those states is the mammoth distances that keep many from accessing services through the VA.

“They’re so isolated. Many are on reservations and are hours from any sort of services. When you get a person who is disabled and they’re six hundred miles from a VA facility, that means the tribe needs a program to help connect those two. TVRs are that connecting point,” said Yates.

Like many around the country, Native Veterans also share a mistrust of a VA that for decades has underserved or encumbered individuals trying to receive services they’re entitled to as
former service members.

“When we served, we were warriors. Having to go to the VA, ask for help and not receive it, it’s a way of losing face that many Native warriors just refuse to go through. So TVRs, we
sit down with these vets and talk, show them there are ways of being treated with respect and show them how we can help.”

While his assessment of progress remains bleak, which Yates attributes to the sheer scale of mismanagement that the VA has operated under for decades, his outlook on the work of
TVRs is more upbeat. In addition to his recognition by Governor Bullock, Yates has been honored by fellow tribes with an honorary eagle feather and other gifts. One of his most treasured was a Pendleton Blanket gifted to him by the Nez Pearce Tribe of North Dakota, called “a great honor” by the Wilmett Family descendent.

“Serving Native Americans is my motivation, especially if I can act as a go-between for those veterans and a government they may not fully trust,” said Yates. “Though officially, my role is to serve CPN vets, then other Native Americans, and then all veterans. But I’ll try to help anyone I can if they get in contact with me.”

If you are a veteran, or know one, please encourage them to get in contact with the CPN Veterans Service office. Contact Clyde Yates by phone at 405-598-0797 or via email, cyates@potwatomi.org. For Oklahoma- based Native American veterans, more information is available through the American Indian Program at the Jack C. Montgomery VA Medical Center
in Muskogee, Okla.