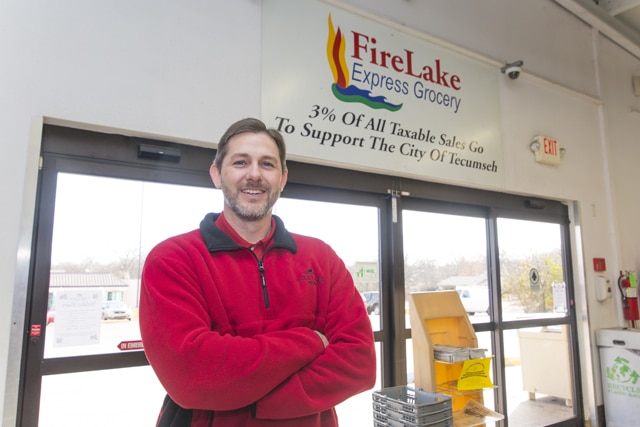 CPN’s impact on Pottawatomie County’s largest city, Shawnee, Okla., is well known. Since 2001 alone, Tribal employment has accounted for 7 of every 10 new jobs in Shawnee. That impact doesn’t stop there though. Lying just south of Shawnee is the City of Tecumseh, home to another CPN-owned enterprise that is that community’s largest employer.

FireLake Express Grocery, the only grocer in the town of 6,400, offers a variety of non-perishable foodstuffs along with fresh meat, dairy and produce. Since opening in 2004, Manager Mike Lester has been at the helm of the store’s day-to-day operations.

Lester, who got his start in the grocery store sector as a sacker at Pratt Foods, kept in touch with that chain’s then-manager, Richard Driskell. His former manager, now a longtime Director of FireLake Discount Foods, approached the Macomb High School graduate about working for the Tribe.

“Richard mentioned one day to me to come work for the new grocery store he was managing,” said Lester. “I had a job at the time, so it was something I really had to think about.”
Having grown up in Pottawatomie County though, Lester’s familiarity with the area and its people, coupled with his past experience working with Driskell, eventually swayed him to join the Tribe.

“That was one of the best decisions I’ve ever made,” said Lester. “Working for CPN you truly feel like you’re a part of a family.”

The FireLake Express store manager has witnessed the growth of the Tribe’s grocery stores since the opening of FireLake Discount Foods in 2001, when he began serving as that store’s assistant manager. His success there resulted in Lester’s nomination to head the Tecumseh operation when the Tribe decided to open FireLake Express Grocery in 2004.

“At the time there wasn’t a grocery store in Tecumseh,” he explained. “Even more complicated was the fact that the city government of Tecumseh wasn’t sure if having the grocery store there would benefit the community.”

Now ten years into operations though, the city fathers’ initial hesitation has given way to enthusiasm for the grocery store’s positive impact in the rural Oklahoma town.

“In the past decade we have outgrown the demand and all negative feelings about the grocery store moving in have gone by the wayside,” Lester continued. “We employ up to 40 people, offer fresh meat and produce and voluntarily give three percent of taxable sales that go back into the economy of Tecumseh.”

The success of both FireLake Discount Foods and FireLake Express Grocery has resulted in another planned grocery enterprise spawned for the City of McLoud. Lester is helping with the development of the new store that will be open in 2015. Like FireLake Express Grocery, the McLoud operation will mirror Lester’s current store, and will be a smaller version of FireLake Discount Foods that features a bakery and gas station.

On his days off Lester can be found in and around Pottawatomie County watching one of his four kids play sports. A self-described “football fanatic,” Lester also officiates and plays flag football.  His three boys play football and lacrosse and his only daughter is a cheerleader.

“I love getting to watch my boys play and my daughter cheer at their football games, but really whatever they have going on is what I do in my free time,” said Lester.