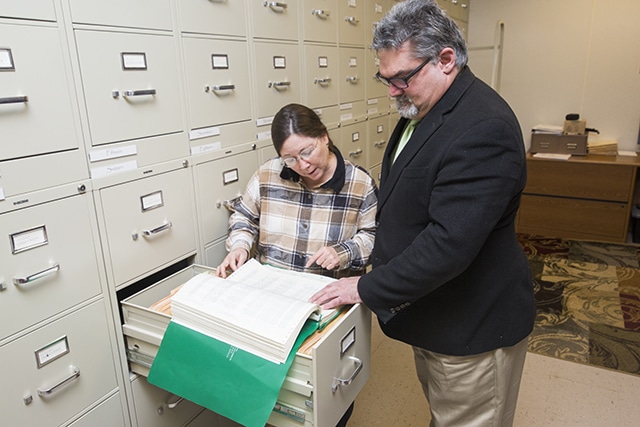 Enrollment in the Citizen Potawatomi Nation is based on descendancy only.  A biological parent must be an enrolled member for the applicant to be eligible to become a Tribal citizen. The application process is very simple, but it must be filled out completely and a birth certificate is needed to confirm descendency. Copies are not acceptable; the birth certificate must be state issued or be a notarized copy.

If it is the father on the rolls and their name does not appear on the birth certificate, a court document listing the name of the biological father or a DNA test will suffice. However, additional documentation may be requested.  If a DNA test is needed to confirm parentage, the test must be a legal DNA test.  A legal DNA test confirms the identity of the people prior to being tested and a standard test does not.

Sometimes a grandparent will be on the rolls, but their children or grandchildren are not. It is very common and it is not an issue. Multiple generations can be enrolled, but must be done at the same time. As long as the proper paper work is sent in showing the biological connections, two and sometimes three generations can enroll together.

There are cases where a child of CPN descent is adopted by non-tribal parents and the adoptive parents’ names are on the birth certificate. These types of enrollments are handled on a case-by-case basis because of the nature of the adoption and confidentialities involved.

If a CPN member adopts a child that has no biological connection to the Nation, that child is not eligible.

Like many other Indian nations, CPN prohibits dual enrollment.  If the applicant is a member of another tribe and one of their biological parents is a member of the CPN and wishes to enroll in the CPN, they must first relinquish their membership with the other tribe. Most tribes will accept a conditional relinquishment, which means that if the applicant fails to enroll, they will remain enrolled in their present tribe.

However, there are some tribes that do not recognize a conditional relinquishment, thereby forcing that individual to permanently relinquish their membership altogether.  The problem here is that if they fail to get enrolled, they’re left without a tribe. It is always best to understand the conditions of enrollment completely before considering enrolling in another tribe.

The CPN also has a conditional relinquishment clause in its enrollment ordinance. We don’t like to lose a member, but if it is their desire to join another tribe they may do so.  They will need to fill out a form, give us the original and send a copy to the other tribe. A resolution is drawn up for a relinquishment just like an enrollment resolution.  Once the resolution is passed a note is placed in the member’s file showing that their membership will be relinquished upon their acceptance in the new tribe. If a minor is relinquished from our Nation, they may reestablish their membership once they turn eighteen.  An adult who has completed the relinquishment process is no longer eligible to re-enroll.  Please make sure you’ve considered your options before relinquishing your tribal membership.

The number of enrollments reviewed by the CPN Tribal Rolls Department is significant. During the enrollment process, every application is checked for authenticity, completeness and accuracy.  Unfortunately a large number of applications are incomplete and therefore returned. Please double check that everything has been filled out correctly to avoid any delays in the enrollment process.  About 95 percent of the forms are easily verified. The ones that take time involve adoption, verification of parentage if their name is not the child’s birth certificate and DNA testing if required.

A small percentage of applications that prove most challenging can take a considerable amount of time to move through the process. These include applicants that are well into their senior years and do not have a biological parent on the rolls, those who lack a birth certificate or even individuals that only think they have blood ties to the Nation.

There was a time when people actually kept their Indian Heritage a secret from the community and even their own families for fear of racial reprisal. This was a sad situation because that denial would prevent future generations from being eligible for membership.  Like the majority of other tribes, the CPN does not skip a generation. It’s unfortunate that when a person realizes that they may have blood ties to the Tribe, or any tribe for that matter, that separation between generations offers no possibility for enrollment.

There is a provision in the tribal constitution that if a person applies for membership and their biological parent does not have a roll number but was on the 1937 census they would be eligible for membership, provided they meet the other conditions for enrollment.

If, however, a parent was not on the 1937 census but would have been eligible, they can still be considered provided that they have the proper documentation showing descendancy. In this case, the applications are on a case-by-case base because the documentation for verification can vary with each applicant.

Today there are many looking into their past to see if they are of Indian descent. The requests for that research are growing. The first rule of pursing those investigations is to not be discouraged. There is enough information out there on the Internet to help point researchers in a general direction. You have to do the research, which begins in the area where your ancestors lived.

Some states started voluntary birth registrations as early as 1867, but were nothing more than an entry in a book. Most people didn’t do it because there was a 20 cent fee attached to the registration. Birth certificates proper weren’t issued until the early 1900s, but didn’t become mandatory until WWII. In the Southwest and Deep South chances of finding a birth certificate dated before 1935 is almost zero.

Researching names of American Indians going back to the late 1800s can be found in census lists if the situation presented itself.  It was not always the case. Going back further, unless a particular individual stood out to be noticed by history, chances are that finding a name will be a difficult task. Local baptism records, family letters, diaries and military logs are the best resources, but you will have to visit the local historical societies to look at this material. Scanning this material to make it available to the public via Internet takes funding on part of the institution that houses this information.  It’s not always available to those who need it.

The reality is there are 566 federally recognized tribes in the United States, and this doesn’t include the number of unofficial tribes or bands. We have a good library and plenty of research material for the Citizen Potawatomi Nation, but like any other tribe or genealogy library, we do not possess all the information of all of the other tribes. Tracking down the past takes patience, motivation, the willingness to dig deep and the ability to connect the dots.

If you find that you do have a bloodline with an Indian tribe you will need to contact them concerning the requirements for citizenship.  Every nation has its own procedures and conditions for enrollment.

At CPN, the Cultural Heritage Center’s Mezodan Research Center and Library provides an abundance of historical, cultural and genealogical resources pertaining to the Tribe. The Tribal Archive and Research Division are available to assist any and all interested researchers.