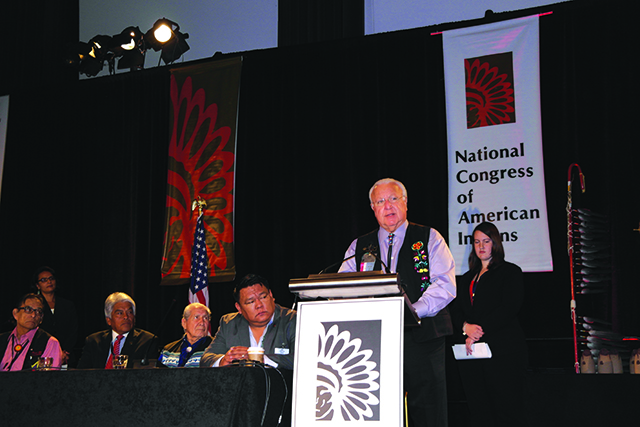 Since Harvard’s Honoring Nations program began recognizing excellence in Indian Country in 1999, the Citizen Potawatomi Nation has been awarded four times for its progress. The work of the Citizen Potawatomi Community Development Corporation was recognized in 2006, and in 2010 the Tribe’s constitutional reforms received honors. In 2013, the Tribe gained additional accolades for its constitutional reform project as one of three of All-Stars. Most recently in October 2014, the Potawatomi Leadership Program, a six week internship program for college age Tribal members, was one of three to receive the High Honors award at the National Congress of the American Indian Annual Convention.

2013 PLP alum Miranda Hazelton, the program’s representative at NCAI, gave a stirring speech describing the importance of the Potawatomi Leadership Program in her own life.

“I was very honored when I was asked to give the speech,” said Hazelton. “After hearing about the other honorees’ projects, I was honored to be just sitting next to them. One of the (Honoring Nations) board members said my speech really described exactly why the PLP was chosen, and that my words represented the native youth across the U.S. who are also disconnected from their tribes. This was so amazing to be a part of. I’m really grateful I was given an opportunity to express my feelings about PLP.”

Chairman of the Honoring Nations Board of Governors Chief Oren Lyons commented that “The 2014 Honoring Nations awardees look down the long road and don’t get lost in the demands of the moment. They are about our future, and the children coming, and the responsibilities of all leaders to their nations.”

A member of the inaugural 2003 class, Noelle Albano, was also in attendance at NCAI. The Toupin-family descendent echoed the sentiments of many PLP participants in terms of the program’s ability to foster closer connection to the Potawatomi tribe in Oklahoma and its members from across the country. Albano also extrapolated on what the program’s impact has been on her as she looks back more than a decade when she was a PLP participant.

“When I was in the PLP, I understood the program was awesome. But I couldn’t have imagined the far reaching impacts of the PLP program. Now I get it. Having a program like the PLP is absolutely essential for long term growth of a tribe. If you look back on any civilization, those that have stood the test of time have passed knowledge and cultural heritage from one generation to the next and adapted to change, in spite of great adversity,” Albano said.

The High Honors award from Harvard’s Honoring Nations Program is the top distinction handed out by the program each year. The award winners will also have a place in an exhibit at the Smithsonian’s National Museum of the American Indian in Washington D.C. and a web platform through Google Cultural Institutes.

CPN is well-represented at the Smithsonian, with the Tribe’s 2007 constitutional reform project currently part of this year’s Harvard Honoring Nations exhibit. CPN artist and photographer Sharon Hoogstraten’s work is also prominently featured in the Potawatomi tribe’s “Nation to Nation” exhibit, also on display at the Smithsonian.

Austen Roselius, a 2011 PLP class member, has served as a counselor for the program in recent years. The University of Oklahoma microbiology student gave his take on the program, both as a former participant and as a leader.

“The granting of this award to the Nation really reiterates how vitally important the PLP is in carrying out one of the most important duties of tribal communities in grooming motivated, passionate leaders that will lead their people into the next generation,” he said. “It has been an absolute pleasure serving as counselor for these past few years, and it makes that time even more memorable knowing that such a prestigious committee believes in the mission of the PLP, as we have all along.”

As the Potawatomi Leadership Program prepares to welcome its twelfth class in the summer of 2015, its impact on past participants was best summed up by Hazelton’s speech.

“I have gained confidence in who I am and what I want, and am no longer afraid to express my opinions. I have gained new skills that allow me to be more independent from my parents. I have taken the first step towards adulthood, and the future doesn’t look so scary anymore,” said Hazelton.