At the October 6 Shawnee City Commission meeting, Commissioner Keith Hall opened proceedings by saying he wished to clarify the intent of a motion he had made at a previous meeting. That motion called for possible action in investigating a conflict of interest between commissioners and the Citizen Potawatomi Nation. Hall claimed that he had received phone calls from constituents questioning Commissioner Lesa Shaw’s husband’s employment at CPN Health Services. Hall claimed he simply wished to have the issue of Dr. Ron Shaw’s employment aired publicly, but apologized for any confusion. 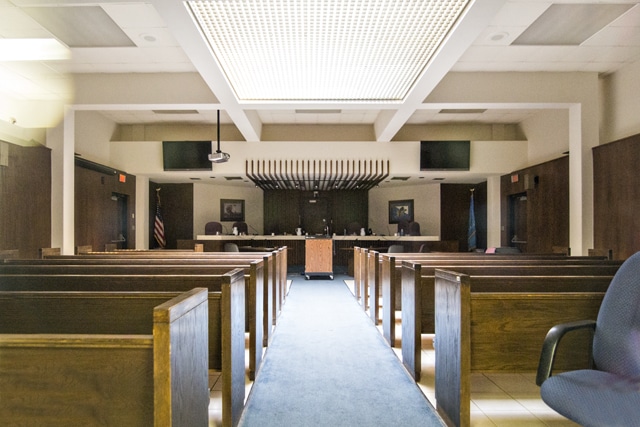 In another matter, Commissioner Shaw requested that the time allotted for citizen’s comments be expanded to 20 minutes per topic since many citizens were in attendance at the evening’s meeting. The ensuing vote failed, with Mayor Wes Mainord, Vice-Mayor James Harrod, and Commissioners Hall and Gary Vogel voting against extending time for all the citizens to speak.

In the 12-minute citizens’ comment issue, all speakers cautioned the commission against retaining counsel to sue local tribes for failure to collect and remit city sales tax. On several occasions both Mayor Mainord and Vice-Mayor Harrod interrupted CPN Chairman John Barrett. One final speaker, known to be supportive of the Tribe’s position, was told by Mayor Mainord that she could not speak on the issue because the 12-minute time limit had expired.

The commissioners did vote on an item that would defund the litigation procedures for failure to remit city sales taxes, though later retained the very same law firm, Mondrell Spurling, to litigate against outside entities for encroachment of utility services on municipal jurisdiction. The city-owned Shawnee Municipal Water service’s main competitor in the areas outside of Shawnee proper is Rural Water District 3, a CPN-owned entity serving large parts of southern Pottawatomie County.

Also on Oct. 6, Shawnee City Clerk Phyllis Loftis denied CPN’s September 10 petition for detachment on the grounds that CPN was not the legal owner of the property because of its status as federal trust land.

The city clerk and commission stood by the decision despite a letter from Asst. Secretary of Indian Affairs Kevin K. Washburn affirming that “Indian tribes are the beneficial owners of land held for them in trust by the United States. As such, tribes enjoy full and exclusive possession, use and enjoyment of tribal lands. Further, tribal governments exercise jurisdiction over trust lands and trusts lands are generally exempt from jurisdiction of local and state governments, except where Congress has specifically authorized jurisdiction.”

In protest of the decision by Loftis, CPN filed a civil complaint in Pottawatomie County District Court requesting action on the petition detachment by the city commission. That case is still pending.

At the Oct. 20 Shawnee City Commission meeting, when two items regarding discussion and possible action on the detachment of CPN lands were placed on the evening’s agenda, Vice-Mayor James Harrod moved to table the items until after the court proceedings were concluded. Along with the votes of Mayor Mainord, commissioners Hall and Linda Agee, in addition to an abstention by Commissioner Vogel, the items were tabled.

Bruce Winston, an attorney representing CPN, explained that the Washburn letter identified tribes as the true owners of their trust lands, giving them the right to petition for detachment. Winston also explained that the Oklahoma statutes on detachment entitled the petitioners to a full public discussion despite the lawsuit and the city clerk’s initial denial of the opinion.

Winston was asked by Commissioner Agee if the city commission could still rule on a petition even though CPN had filed a civil action. Winston responded by reading the statute verbatim which states that even after the city clerk’s decision, within ten days the governing body shall hold a hearing and take such action as the governing body finds sufficient.

Commissioner Keith Hall dismissed Winston’s reading, saying that was just his personal interpretation of the law. Commissioner Hall then reminded the meeting’s attendees that while he was not a lawyer, he personally would interpret the statute differently and questioned the necessity of voting on CPN’s detachment since the case was already in the court system.

At the Nov. 3 City Commission meeting, likely fearing more citizen comments decrying the city’s actions against tribes, Commissioner Hall asked that citizens’ participation be removed from the agenda.{jb_quoteleft}The move to stop public comment the day before an election was a strange tactic for the four commissioners, especially given how much lip service they have given in recent months about allowing the people of Shawnee to have a say on such matters. It appears the four’s robust endorsement of free speech and citizens’ participation in local government is only applicable to those whose opinions conform with theirs, while everyone else is forced into silence.{/jb_quoteleft}

Commissioner Hall claimed that given the timing of the meeting the day before an election on the ballot initiatives that would change the city charter’s procedures on land detachment, he did not want citizens giving impassioned speeches that may sway voters on an issue.

Mayor Mainord agreed, telling fellow commissioners that “we don’t have to have citizens’ comments, ever.”

The motion carried with Hall, Harrod, Mainord and Vogel’s votes.

The move to stop public comment the day before an election was a strange tactic for the four commissioners, especially given how much lip service they have given in recent months about allowing the people of Shawnee to have a say on such matters. It appears the four’s robust endorsement of free speech and citizens’ participation in local government is only applicable to those whose opinions conform with theirs, while everyone else is forced into silence.

The Nov. 4 election on proposed changes to the city charter resulted in the passage of Proposition 1. The new law makes any property owner requesting detachment now go through a procedure in which their petition for de-annexation from Shawnee goes first to the city clerk and city commission. If those two hurdles are surmounted, the detachment petition is then placed on the ballot for the next general election day for a vote of the people.

Proposition 2 failed however. That proposed change would have forced an arbitrary set of repayment procedures on property owners should their de-annexation petition have passed a vote of the people.

The day after the election, Commissioner Hall told the Shawnee-News Star regarding the initiative’s failure that, “We didn’t, I didn’t, do a good job explaining what Proposition 2 is really about. We’ll probably try again in four or five months.”

At the December 1 city commission meeting, Commissioner Agee introduced a measure that would have created a city ordinance establishing written standards for citizens’ comment. Agee explained that she wanted encourage citizens’ participation in their local elected government by establishing rules that kept city commissioners from debating or interrupting speakers. {jb_quoteright}Commissioner Vogel’s abstention mirrors his previous stance on issues at city hall, where he continues to abstain from votes while his fellow commissioners take a position. It is curious that after three months on the Shawnee City Commission, Vogel doesn’t realize that abstentions from votes that require a majority to pass essentially count as a no vote. As of late, those abstentions have almost always benefitted Mayor Mainord, Vice-Mayor Harrod and Commissioner Hall’s positions, regardless of the matter.{/jb_quoteright}

Commissioner Hall countered that the commission’s current policies were sufficient, and said that allowing the mayor to decide on extensions of time for discussion had worked in the past. He called Agee’s proposal a “knee jerk reaction” to complaints about his removal of citizens’ comments from the Nov. 3 commission meeting.

Agee replied that in passing the ordinance, personal biases would be removed from the decision making process of who could and could not speak. The point of the measure was to codify rules that could not be arbitrarily revoked when the mayor or other commissioners did not agree with what the speaker was saying. Commissioners Michael Dykstra and Shaw also spoke in support of Agee’s proposal.

The vote was a 3-3 tie, with an abstention from commissioner Vogel, resigning Agee’s proposed ordinance to defeat. Commissioner Hall, Vice-Mayor Harrod and Mayor Mainord all voted against the measure with commissioners Agee, Shaw and Dykstra voting for it.

Commissioner Vogel’s abstention mirrors his previous stance on issues at city hall, where he continues to abstain from votes while his fellow commissioners take a position. It is curious that after three months on the Shawnee City Commission, Vogel doesn’t realize that abstentions from votes that require a majority to pass essentially count as a no vote. As of late, those abstentions have almost always benefitted Mayor Mainord, Vice-Mayor Harrod and Commissioner Hall’s positions, regardless of the matter.