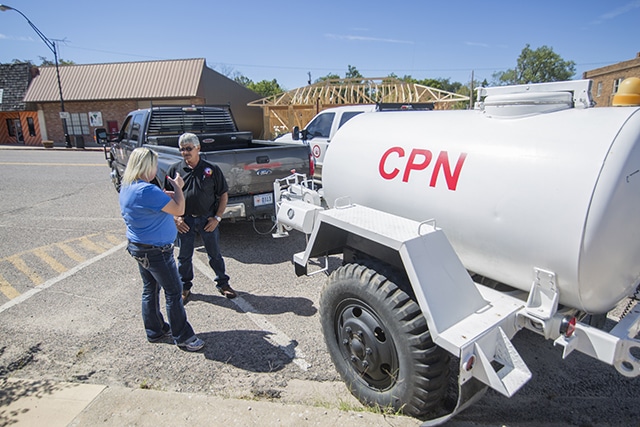 In 2004, CPN Public Safety Director Tim Zientek met with fellow emergency management personnel from Oklahoma’s other Native American tribes. It was a time of coinciding circumstances for many Oklahoma tribes, as tribal governments began to develop emergency response services of their own. Long reliant on outside entities like local, state and federal authorities in their time of need, tribal emergency response officials like Zientek came to one stark conclusion as they sat across the table from one another in 2004.

“We realized, after talking about our experiences, that in the event of a disaster on tribal land, tribes could not rely on anyone but themselves in the immediate aftermath,” recalled Zientek.

The reasons for this isolation have more to do with jurisdictional overlap rather than apathy on part of state and local authorities. Tribes operate in a unique system of self-governance delegated by the federal government, local, state and federal agencies all have differing standards of what constitutes a disaster. Trying to get all three of those entities to coordinate is a difficult task on tribal land, where jurisdictional questions can lead to more red tape. These concerns manifest themselves worse in times of emergencies, when the fog of war can disrupt effective communications.

The results from that 2004 discussion developed into the Intertribal Emergency Management Coalition, or ITEMC.

“Whenever a disaster hits, ITEMC members are our primary contacts. Our first calls out are to other tribes, and vice versa,” explained Zientek.

In May 2013, CPN members were especially hard hit by tornadoes and flooding, resulting in ITEMC’s response capabilities being put into action. In the aftermath of the May 19 tornado that destroyed substantial portions of property lying in the CPN Tribal jurisdiction, Zientek estimates that six of his first ten phone calls came from fellow ITEMC members asking what they could do to assist the rescue and recovery efforts.

ITEMC has also been at the forefront of changes in federal emergency response policies through FEMA’s tribal consultation policy, of which Zientek has been a leading advisor. With 32 members ITEMC has increasingly been the unifying voice in which tribes communicate with local, state and federal emergency management personnel after years of neglect. ITEMC has hosted two listening sessions with FEMA officials where tribal emergency management officials explained tribes’ point of view in how to best prepare and deal with disasters.

One tribal suggestion regarded FEMA’s policy regarding when to consult with tribes concerning policy changes. The policy’s original language meant the agency would only consult with tribes if FEMA itself determined that the changes might have an impact on the tribal government.

“Basically it allowed FEMA to decide how it was impacting tribal governments, and not the other way around,” said Zientek. “On any policy or procedure changes, FEMA had placed the onus on themselves to let tribal governments know when something would impact them. This policy was one instance where we (ITEMC) brought that to the table and told them, ‘This is wrong. The tribe should decide this,’ and they put a procedure in place that allows that input from tribes.”

Another change was ITEMC’s push to have FEMA and other agencies meet face-to-face with tribes regarding emergency response preparedness. As Zientek explained, tribal governments across the U.S. have varying capabilities, including technological and logistical challenges, which do not always make a telephone call or video chat with Washington D.C.-based officials practical. FEMA has subsequently made the effort to personally meet with tribes across the U.S. on emergency response preparedness.

Amendments in 2013 to the Stafford Act changed both how tribes respond to disasters, but also improved relations with the state. Prior to the amendments, tribes had to first go through a state and then federal government process to have an area of tribal land declared as a disaster area. The Stafford Act allows tribes to go directly to the federal level, saving on time and bureaucratic burdens on part of the tribes and states in which they are based.

“The changes in the Stafford Act initially met with opposition from states, who would lose out on some funding. However, the relationship between Oklahoma and tribes has taken a huge turn for the better since the creation of the coalition for the simple reason that state officials only have to speak with one body, ITEMC.”

Zientek is the only tribal representative that sits on FEMA’s Region Six Advisory Council, a testament to his and ITEMC’s growing reputation in the national emergency response sector. While the investment in emergency preparedness can be daunting, especially when looking at the funds a tribe will spend up front, the Pottawatomie County-native insists that like all investments, preparation is an investment that pays off when necessary.

“Emergency management is a cost to the tribe,” said Zientek. “But when you look at the costs associated with a disaster hitting tribal lands or infrastructure, without an emergency management program in place, it will cost a tribe much more in the long run.”