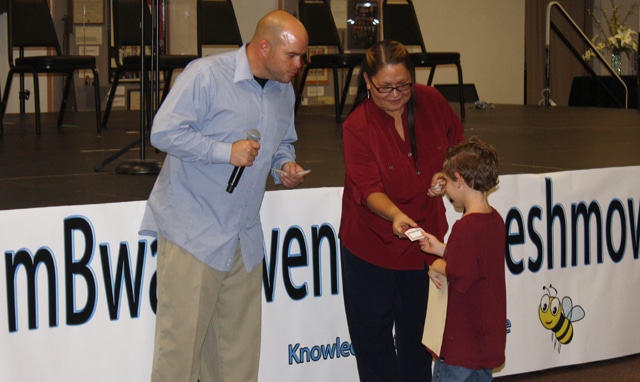 This November the CPN Child Development Center and the CPN Language Department will once again host the Potawatomi Language Bee. This event is a source of pride and excitement for students, parents as well as teachers. Students at the child development center have opportunities to display their language skills throughout the school year, but many of those activities, which include graduation and the Christmas program, occur during the work day and only a limited amount of parents can attend such events.

To remedy this conflict we decided to hold the Potawatomi Language Bee to create a fun, yet competitive, forum convenient for parents and guardians to see their student speak our language.

We wanted to create a new avenue of student-community involvement after registering a group of five year old students in a Native language competition in Norman, Okla. in the spring of 2011. The students won third place in the competition and proudly brought home a trophy that is displayed in the CPN Child Development Center.

I noticed a significant increase in the students’ confidence when speaking Potawatomi after the competition. It was as if they no longer needed assurance it was ok to speak Potawatomi because they had the awards to prove it.

The Potawatomi Language Bee will allow the students to showcase their language skills to their friends and family as well as compete for prizes. Depending on the children’s age and fluency, they will be asked to translate words and phrases from Potawatomi to English, as well as formulate simple sentences in Potawatomi.

Some of the prompts will be more challenging than last year because the kids’ skills have improved dramatically since that time. Children are capable of learning so much more than what I was giving them. In the middle of the school year of 2012 I noticed that the group of kindergarten students were excelling faster than the curriculum developed for them, so I decided to teach them simple sentence structure. This is a skill many adults have trouble learning, but three year old children can learn them in two weeks’ time.

Of course none of this would be possible without the cooperation of the staff at the CDC, especially Director Donnette Littlehead. A big migwetch to her!

The 2014 Potawatomi Language Bee will take place on Thursday, November 13 at 6 p.m. in the CPN Child Development Center. If you have any questions please contact me at 405-878-5830 or randy.schlachtun@potawatomi.org.