Jon Boursaw, District 4 CPN Legislator from Topeka, Kan. was amongst the honored Bourassa family members at the 2014 Trail of Courage Living History Festival event on Sept. 20 in Rochester, Ind. 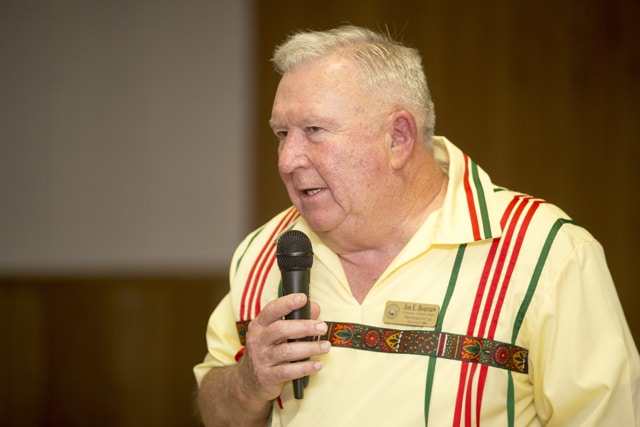 “Obviously it is an honor to me and my immediate family that I have asked to represent the entire Bourassa family at this Festival,” said Boursaw. “Although we are one of the largest CPN families, we are only one of over 40 Tribal families that have endured and suffered through many generations. But together these families have persevered to create a Nation for which we proudly say ‘Bodewadmi ndaw – I am Potawatomi’.”

Boursaw, is a direct descendent of Daniel Bourassa, who along with his wife and seven children, was amongst those Potawatomi forcibly removed from Indiana to Kansas in the 1838 Trail of Death. A member of the 2008 and 2013 Trail of Death caravans, in which Potawatomi and others interested in the march’s history travel the old route across the American Midwest,

Boursaw played a pivotal role in securing an apology from current Kansas Governor Sam Brownback for that state’s role in the treatment of the Potawatomi.

“I have long felt deeply that the state of Indiana should apologize for the Trail of Death,” said Willard in a press release. “That terrible forced removal that cost the lives of 42 Potawatomi, mostly children and elderly, was ordered by Indiana Governor David Wallace in 1838.Therefore I felt it fitting that Indiana Governor Pence issue an apology for the Trail of Death for the Indiana Bicentennial of 2016. Although he does not use the word apology, I feel this is a step toward recognizing this sad part of our history and its aftermath.”