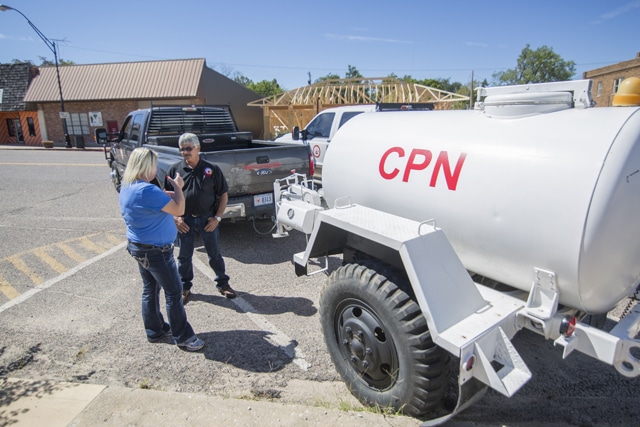 Konawa, Okla. has been especially hard hit by the Oklahoma drought in recent years. Like many rural municipalities across the state, aging utility infrastructure combined with environmental issues have left the small Seminole County town without water on several occasions in the past two years.

With the wells that feed the town’s water supplies running close to dry on Sept. 22, the call went out for assistance in this time of need. Citizen Potawatomi Nation’s Director of Emergency Management Tim Zientek, received one such call from the State Health Department to assist the Konawa municipal government on Sept. 22.

“The emergency manager, Janesa Miller, said that the town’s wells are running dry,” explained Zientek. “They’re our neighbors, being near our tribal jurisdiction, so we got our water tanks filled up and loaded a pallet of bottled water up to take down to Konawa.”

Filling up via the tribal-owned Rural Water District 3 pipeline infrastructure, CPN donated 800 gallons of non-potable water to Konawa City Hall on Monday afternoon, along with a pallet holding 72 cases of bottled water.

“Out away from the large municipalities, we know as tribal representatives we have to help look out for our neighbors,” said Zientek. “They do the same for us, so we’re just happy that we could be of assistance to Konawa this time.”