Traveling to Gathering, a way of life for Cathryn Wamego 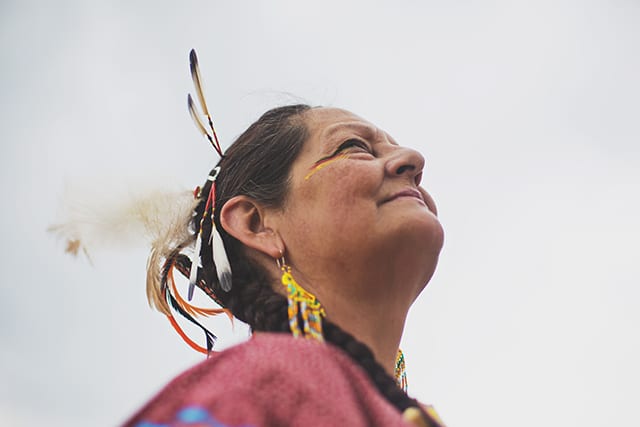 In the mid-1830s bands of the Potawatomi endured a forced removal that displaced the tribes from the upper Midwest of the United States to Kansas and Oklahoma. In commemoration of that horrendous journey, tribal elders from all bands of the Potawatomi agreed to hold an annual event to bring all bands together to embrace each other and the peoples’ shared culture. The event, now in its twentieth year and known as Gathering of Nations, draws members from all Potawatomi bands to a different host tribe each August. No matter where the event is located though, a seat on the bus trip from Oklahoma to Gathering of Nations will always be saved for CPN member Cathryn Wamego.

This year’s Gathering, hosted by the Gun Lake Tribe in Hopkins, Mich., was a distance of 929 miles from Shawnee, Okla. Wamego, along with other regulars who regularly travel to Gathering joined the bus in her hometown of Tulsa, Okla. It was her sixteenth straight  Gathering, a record stretching back to her first trip to Fulton, Mich., home of the Nottawaseppi Huron Band of the Potawatomi.

“My father had always wanted me and my 12 siblings to go to a Gathering to connect with our culture,” explained Wamego.  “From that first year I went, I was hooked and planned on going for the rest of my life.”

Wamego continued “My grandfather always told me that our people came from the place of the big trees. Once I went to my first Gathering in Michigan, I understood why he always said that.”

After her positive experience at her first Gathering, Wamego started scheduling her vacation time around the annual event, travelling on the CPN-sponsored bus from Oklahoma. 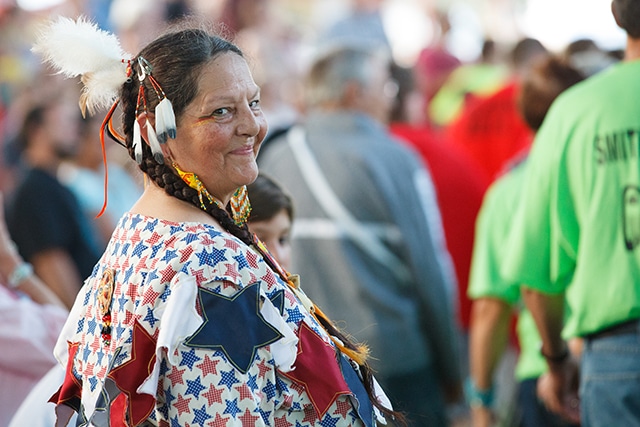 Wamego continued, “I’ve met some of my greatest friends on the bus like Laura Weinstein and look forward to seeing her and everyone else who is a regular attendee every year. I also got to see Justin Neely go from being a regular Potawatomi to becoming the Language Director for CPN. The bus is just another way to interact with the people of my Tribe and there’s always ample time to work on regalia or other projects on the trip.”

Going to Gathering for more than a decade, Wamego has seen the development of the event each year and was impressed with the Gun Lake Tribe’s hospitality and facilities.

“Every year there is always something new to experience,” explained Wamego. “At this past Gathering I got to learn about corn grinding, cultivating and cooking wild rice, and had the once in a lifetime experience at a sunrise ceremony watching a traditional ceremony of a group playing a water drum.”

The drum, called “Little Boy,” is a traditional Midewiwin water drum made from an animal’s hide stretched over seven stones. Witnessing this was quite emotional for Wamego given that the last time a drum like this was played at a powwow at the Match-E-Be-Nash-She-Wish tribal grounds was 100 years ago.

Moments like this are what draws Wamego and others back every year. She encourages the younger generations to learn about their culture and get involved.

“Migwetch to the Chairman, the Zientek’s and everyone else involved with giving us the opportunity to do this trip every year,” said Wamego. “It’s great to have a tribe that understands the value of these traditions and I’m so grateful to be able to be a part of it. I encourage anyone thinking about going, to do it because you won’t regret it.”

Next year Gathering will be hosted by the Forest County Potawatomi tribe in Crandon, Wis. More information about the next Gathering of Potawatomi Nations will be made available in the Events section of www.potawatomi.org as that information becomes available.