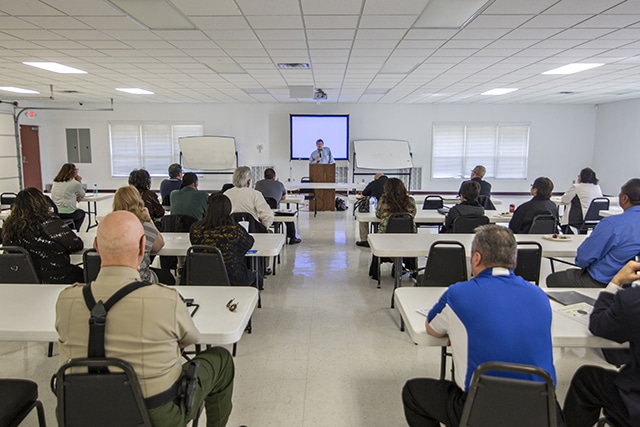 CPN recently hosted the quarterly meeting of the Oklahoma Inter-Tribal Reentry Alliance, a group offering support, instruction, and education training to ex-offenders. The Muscogee (Creek) Nation organized the event to help raise awareness of the issue.

Debbie Severson is a Reentry Program Specialist for the Muscogee (Creek) Nation and was integral in organizing the gathering.

“We get together so we can show the benefits of our reentry programs, as well as and most importantly, to motivate other tribes to start implementing a reentry program,” said Severson. “We offer support for one another and bounce ideas off each other. We want to get everybody on board, Native American or not, to start a reentry program. Our goal is to continue to have more service to our citizens and clients who come out of prison. We want to educate and help them know what beneficial resources are offered for ex-offenders when they get out.”

CPN’s Margaret Zientek, assistant director for Employment and Training, was on hand for the meeting along with other CPN employees Burt Patadal, Sue Johnson, Carol Clay-Levi, Tesia Zientek, and Kasie Nichols. CPN is one of the alliance’s original founding members and has its own reintegration program.

“We are currently applying for a grant to help continue our success with the program with something new called ‘Diversion.’ This program will educate and try and steer individuals on a different path then heading toward prison.” said Margaret Zientek. “Ex-prisoners all have the same problem; transportation, getting a job, and having a place to live. All these problems are huge barriers and you’re dealing with people who made a mistake. Most of them are trying to do right. This program allows us to give them what they need to get back on their feet.”

Oklahoma is ranked fourth in the nation in terms of the amount of people imprisoned and has seen a 2.5 percent increase of people being put in prison since 2011.

Daryl Legg, Director of Vocational Programs for the Cherokee Nation, is one of the alliance’s founding members and a one-time parolee.

“I was incarcerated three different times, which were all drug related charges. After my third stint in 2000, I knew I wanted to better myself. The Cherokee Nation vocational rehab program helped me when I got out. They sent me through college and after I graduated I was recruited by my tribe. I started out as a Vocational Rehab Counselor, then Employment & Training Counselor, and worked my way up to Director of Vocational Programs,” stated Legg. “One of the programs in our Career Services Department and is something that I helped start is our Coming Home Reentry Program. Now I’m able to help individuals getting out of prison just like how people helped me. It’s something I can give back to and the ability to help people stay out of prison, be successful and self-sufficient is my reward.”

Members from the Chickasaw Nation, Muscogee (Creek) Nation, Citizen Potawatomi Nation, Sac and Fox Nation, Choctaw Nation, Seminole Nation, and several others were in attendance for the organizations meeting.