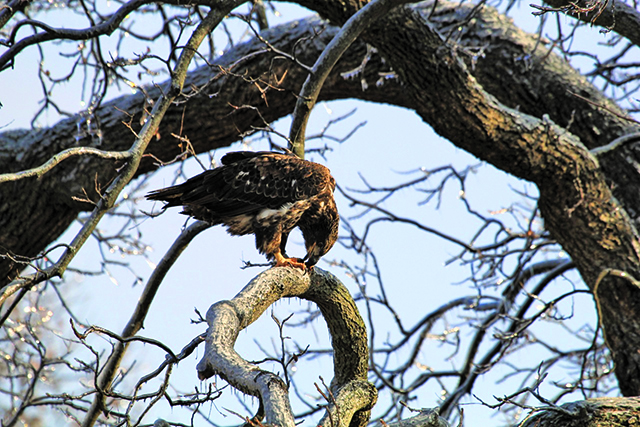 In June of 2012 the Citizen Potawatomi Nation Eagle Aviary received a juvenile bald eagle originally from the Florida Audubon Society. Many people know this eagle as Wadase and have watched her progress for the past year as she began to explore Pottawatomie County.

Long before she was Wadase Zhabwe, CPN staff knew her as “Penojés”. Discovered near her nest in Orange County, Fla., she arrived at the CPN Eagle Aviary when she was approximately five months old and was given the Potawatomi name, Penojés. She had suffered an injury to her left wing, including a fractured wing tip, extensive tissue damage and loss of her primary flight feathers.

The CPN Aviary staff planned to glove train the young bird and use her as an educational bird for students and Tribal members.

“When we received her we didn’t believe that she would ever fly again,” said Jennifer Randell, CPN Eagle Aviary manager. “At that time, we felt she would make a great educational bird. We didn’t have a separate muse for her then and decided to put her in the enclosure with the other eagles. During that time we noticed that she had an interest in learning to fly and that’s when our plans changed.”

It was not until the replacement set of flight feathers grew in that her flight could be reevaluated. By fall 2012, it was determined that Penojés had regained flight ability well enough to consider release back to the wild.

Penojés was cared for and rehabilitated by several experts in the aviary field. During the course of several months she learned to hunt and regained her strength and conditioning for flight. In April 2013 she received a new Potawatomi name, Wadase Zhabwe, meaning brave break through. Wadase was banded and released with a tracking device so that aviary staff could monitor her progress.

Citizen Potawatomi Nation, the United States Fish and Wildlife Service, the Raptor View Research Institute of Missoula and Comanche Nation Sia had all joined together to rehabilitate Wadase and were prepared to release and track a juvenile bald. The CPN Aviary became the first ever Native American Aviary to release an eagle back to the wild banded and fitted with a GPS telemetry back pack.

“When we set out to track her progress we had no idea what kind of data that we’d get or if the tracking device would even work,” added Randell. “We knew that this juvenile bald eagle needed to be released and was capable of living on her own. Being able to use the GPS device added confidence to that decision.”

After having a chance to sit down and review more than 10,000 photos, 7000 GPS coordinates and all the other telemetry data in 365 days’ worth of information we have gathered so far in four extreme Oklahoma seasons, one thing is clear; we will be telling Wadase Zhabwe’s story and the small part we have been fortunate enough to play in her life for years to come. 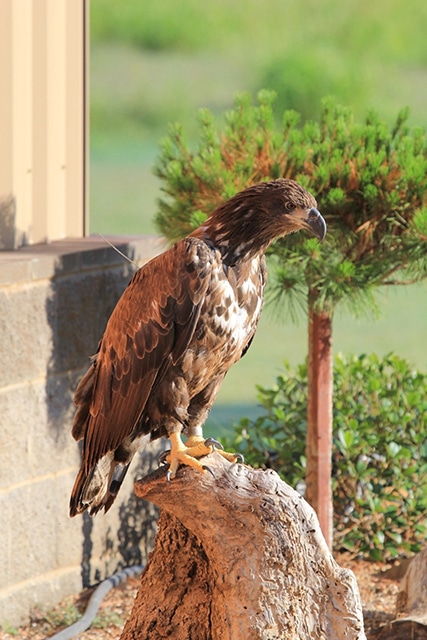 There have been moments when we questioned our decision to release her. Moments that we wonder why we were ever unsure about that decision. We can sympathize in part with how parents must feel sending their kids off to college or how terrifying leaving them on that first day of kindergarten must be. The world can be a dangerous place but today we can definitively say Wadase is thriving in the wild.

We have sat with her through severe storms. Looked on as she found safety from the rising flood waters perched atop the wigwams in the aviary pasture. Even offered her a good meal in the dead of this icy winter, but most of all, we have marveled at her progress.

In a year she has mastered grabbing turtles and fish from the river in one graceful swoop and soaring to heights well over 6,000 feet, just shy of the highest point she will ever fly. We laugh when looking back at the first time she grabbed food in flight from the feeding platform successfully. We were so happy we jumped up and down high fiving each other like we had won the lottery.

She has surpassed all of our expectations. While it is bittersweet that she depends on us less and less, there is no greater satisfaction than to see her do so well and thrive on her own as the Creator intended.

We had not seen Wadase in nearly 3 weeks and as we tracked her this past month, we noticed she ventured east near Henryetta. We suspected she could be heading for Lake Eufaula, however, something must have gotten her attention because she circled back to Wetumka. After taking a closer look at Google Earth we noticed she had spotted a fish hatchery and her latest GPS had her perched right near the bank of the ponds. The following day we went to see the area and to open a tab for her at Harbin’s Fish Farm. Although, the owner said that wasn’t really necessary and we all had a good laugh.

Shortly after our trip east to check on her, she showed up early one morning and spent the entire day here at the aviary. She had been gone 28 days since her last visit. We lost sight of her near dusk when she flew north towards the river to roost. She arrived the next morning and did the same thing as the previous day. The majority of her day was spent sitting on the aviary or in her favorite crook in the tree out front but on several occasions she would fly around the enclosures and land on a large, fresh pile of dirt that had been brought to fill in areas of the aviary grounds that have settled as a result of last spring’s floods. She seemed pleased we had put such an interesting new perch out front in her absence. On the fourth day she left the aviary after noon and flew north of I-40 towards Johnson, Okla. along the river where she has spent a good deal of her time. She then continued on in one long flight past Stroud, on past Cushing and further north past the Cimarron Turnpike until she reached the Arkansas River near the town of Cleveland just west of Keystone Lake in Oklahoma.

Migration has started for wintering eagles and many are making their way back north. Young birds here in the state are near fledging and will be leaving their nests soon. There is no real answer to what has taken her so far north on such a straight path. We have to wonder if those last four days spent here at the aviary were spent resting for a long journey that lay ahead, so in the mean time we wait for her telemetry readings. We are hopeful that her GPS backpack will stay on into her young adulthood so we may continue to follow her progress long after her days with a backpack.  We hope to learn where she will spend her summers and the migratory path she will take in the winter, should she choose to migrate rather than remain in Oklahoma. We’re also curious what territory she will claim and return to each spring to nest and to raise her young. 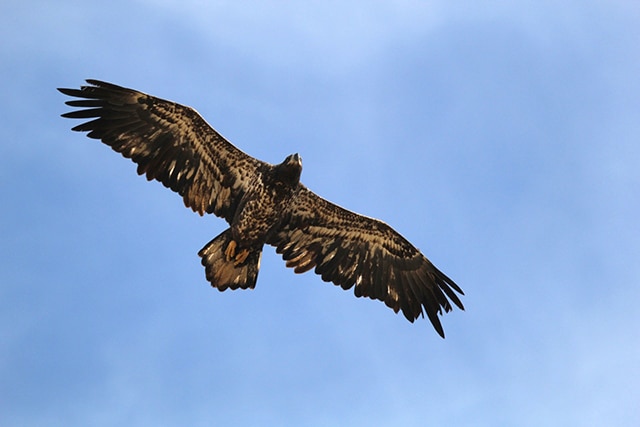 We look forward to what we can learn about young Bald Eagle behavior and their success rates in the wild.  In the past year we have been fortunate enough to see her here at the aviary 146 days. To share that much time and space watching Wadase learn, gain strength and skill, and witness first-hand what it takes for a young eagle to make it on her own has been nothing short of amazing. Never have we witnessed such strength and resilience in any other creature. It is obvious why our ancestors looked to the eagle as our great messenger, carrying our prayers.

Rob Domenech from the Raptor View Research Institute equipped the eagle with a GPS device so that her travel and hunting progress can be monitored. The transmitter allows CPN staff and the public to follow the movements of Wadase and to make certain of her survival in the wild.

“This is the first bald eagle and first soft release we have ever been involved with,” said Robert Domenech, Executive Director of the Raptor View Research Institute. “In general, I would have to say she is doing great. If you get a year of data you can’t complain. Anything after that is a bonus. Wadase has proven herself to be a survivor and I am optimistic she will continue to do well, giving important glimpses into the details of her life.”

Please continue to keep an eye on the skies as Wadase Zhabwe ventures a little farther each month. The many reports of sightings throughout Pottawatomie County have played an intricate part in monitoring her success. For more information or to read previous updates please visit https://www.potawatomi.org/about-wadase