An Eyewitness Report from the Gathering of Nations 2013 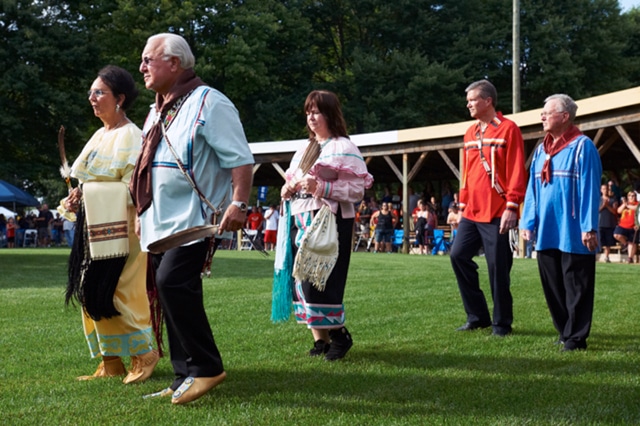 My first foray into the Potawatomi experience (besides reading the How-Ni-Kan) began in 2010 when I started attending Family Reunion Festival in Shawnee, OK. Previously, I enjoyed the concept of being Potawatomi, but never considered taking part in any tribal events. In 2012, I went to the Gathering of Nations hosted by the Nottawaseppi Huron Band in White Pigeon Michigan. At each event I was warmly welcomed and amazed at the generosity of spirit and food. This year was no exception. As I registered at the tent near the parking field, I found myself welcomed, treated to gifts and transported by trolley ride through the beautiful campgrounds to the festival grounds. 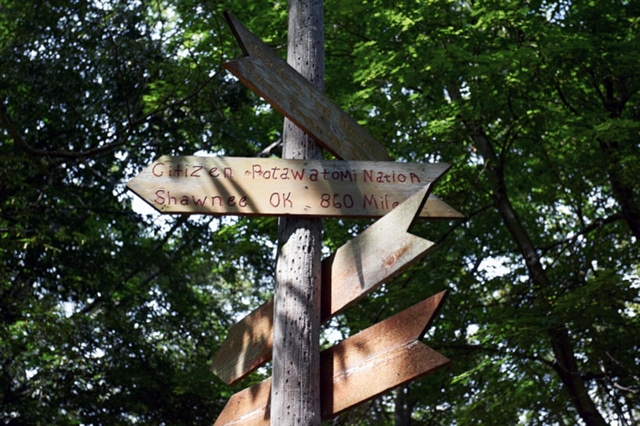 Along the way we passed a tall sign post with directions to each Potawatomi Nation. Seeing “Citizen Potawatomi Nation – 860 Miles” pointing southwest assured me I was a welcome guest of the Pokagon Band. I decided my first move would be to use my food vouchers to get an Indian taco – with the most delicious fry bread. Well fed, I circled the dance arena to take measure of the situation.

Instead the situation took the measure of me and within the hour I found myself beating a drum and with Linda Capps, Rocky Barrett, Roy and Julia Slavin and many other Citizen Potawatomi, learning a traditional song from Kelli Mosteller, director of the CPN Cultural Heritage Center. 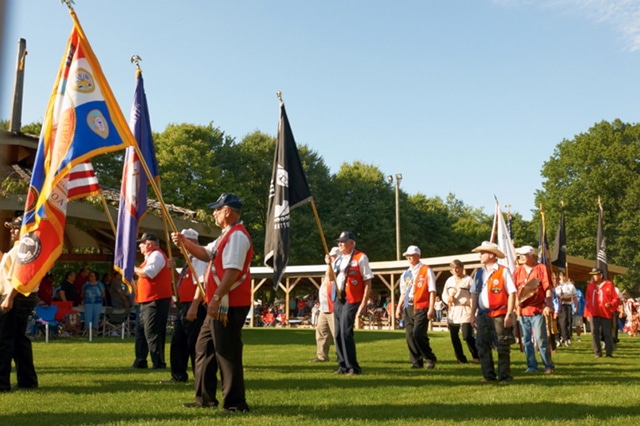 Afternoon drifted toward evening and dancers began to don their regalia and assemble for Grand Entry. Grand Entry is an event, ceremonial, serious and yet joyful, that must be experienced to comprehend. The drums in the drum circle reach into the core of your soul. I have never met anyone, Potawatomi or not, who didn’t respond to the call of the drums. The Friday night Grand Entry was highlighted by beautiful weather and light accentuating the magnificent regalia and dance.

Saturday marked another prime August day and my family was treated to gifts of Potawatomi chairs, meal vouchers, t-shirts, trolley rides through the forest and fun. We watched ash basket weaving, the repair of a birch bark canoe, and beading. We admired the traditional handcrafts, baskets and jewelry sold by Potawatomi vendors. Family Dinner served to us by the Pokagon Band was deliciously fresh home cooking with buffalo meat so tasty that I’m still dreaming about it.

After dinner everyone began to gather for the Saturday Grand Entry. For me, it was a wonderful time of photography, greeting old friends and meeting new ones.  My family headed for the bleachers to watch their first Grand Entry and another beautiful night of ceremony and dance. After the smudging ceremony at the east gate, the Entry procession is led by veterans carrying the eagle staffs of each Nation, followed by veterans carrying the flags of each Nation and then by Potawatomi royalty and dancers in regalia. Proceedings were paused when a dancer’s bustle of eagle feathers fell to the ground and had to be recovered according to tradition.  Eagle feathers represent the spirit of fallen warriors and once on the ground, their spirits must be lifted back up as well as the feathers. It’s a very powerful proceeding as veterans are called onto the field to surround the feathers and I was not the only one moved to tears by the gravitas of the occasion.

Once the dancing began, everyone was invited to participate and my mother and I headed into the arena with my teenaged nieces who had earlier declared it was not for them…but as I said, it’s irresistible. By the last dance, showered with even more gifts, they were proud Potawatomi.

Sharon Hoogstraten resides in Chicago.  She is a professional photographer and the mother of two Citizen Potawatomis.  For the past four years she has been creating photographic portraits of Potawatomi regalia in modern times.