The son of a former Principal Chief the Osage Nation, Tall Chief has held the position for more than two years. Raised in Edmond, Okla., Tall Chief is a graduate of the University of Central Oklahoma. He began his career at Putnam City High school in Oklahoma City, where he both taught and served as a football and wrestling coach.

His career in the health services industry began following a suggestion by his mother.

“She had seen an advertisement for a position with the Association of American Indian Physicians (AAIP) and told me about it. I applied there, and was hired on as a project director,” said Tall Chief.

At the time, the AAIP was implementing a program in medical schools across the nation that sought to recruit and retain Native Americans who wished to attend medical school. 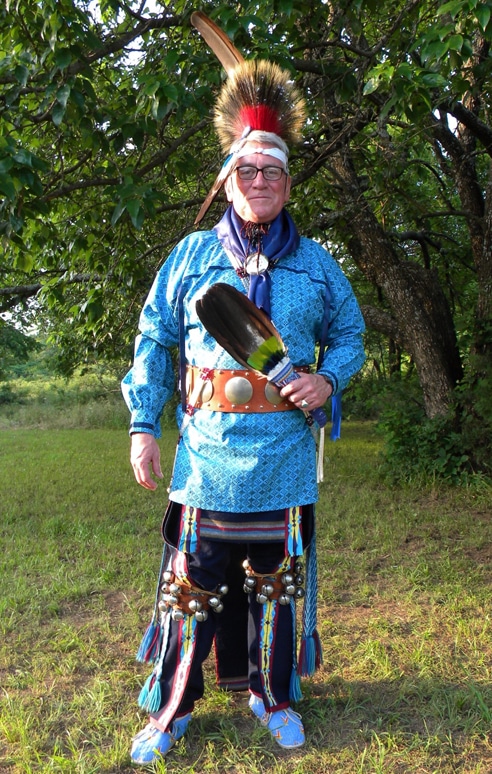 “Retention is actually harder than the recruitment,” explained Tall Chief. “The transition into a college campus and intense medical studies is a culture shock for most, but is especially profound for someone coming off of a reservation.”

Tall Chief helped establish the programs throughout the United States. After doing the same at the University of Oklahoma, he was offered a position to run the program he had helped implement.

Following his retirement from the Department of Health, Tall Chief was the interim Director of Health for the Absentee Shawnee Tribe. Chairman John Barrett invited him to take up his current role with the Citizen Potawatomi Nation.

“We wanted Tim because he came to us highly qualified,” said Chairman Barrett. “His career as a high ranking executive manager at the Oklahoma State Department of Health made him immanently qualified to direct our health services upon his retirement from the state.  I believe one could say we made the right decision after seeing the improvements in the quality and delivery of health care to our citizens.”

“Don’t let anyone tell you retirement isn’t all it’s cracked up to be,” said Tall Chief. “It was great. But it was a good opportunity and after two years here I can say I am really proud of what we do for our patients and tribal members.”

Tall Chief’s pride is verifiable. According to a survey conducted by the medical website, www.vitals.com, the average wait time in a doctor’s office is a little more than 20 minutes. At the Citizen Potawatomi Nation’s two clinics, that time is only 11 minutes.

“That is unheard of in the medical world, whether its private doctor’s offices or public clinics,” points out Tall Chief. “We’re very proud of that. I’d put our clinics and its staff up against any clinic in the country in terms of the quality services we provide.”

The Citizen Potawatomi Nation’s clinics also recently received their audit report from the Accreditation Association for Ambulatory Healthcare. The audits are self-imposed by health providers, who seek to identify areas of their services that need improvement. CPN’s clinics have lived up to Tall Chief’s confidence, showing zero deficiencies.
During his tenure Tall Chief has also overseen the expansion of the tribe’s health services to those not normally served by self-governance tribal clinics. The CPN Clinic West, recently opened near the Grand Hotel and Casino, serves tribal members, their non-Native American spouses and non-Native American tribal employees.

He also sits on the Chickasaw Nation’s Health Services Governing board, and maintains a faculty appointment at the University of Oklahoma. In addition to these duties, he is the CEO of Outdoor Adventures Unlimited Inc., an adventure and culturally-based program serving training needs of corporations, tribes and non-profit organizations throughout the country.

Most CPN members will likely know Tall Chief from his voice as the emcee of the Citizen Potawatomi Nation’s Family Festival, a position he has held for 16 years. When not serving as the voice of pow-wows and rodeos around the country, he can be found ringside at MMA and boxing matches across the state, where he serves as a judge, referee and inspector for the Oklahoma State Athletic Commission. He also sits on the CPN Boxing Commission.

Citizen Potawatomi Nation Health Services’ goal is to provide high quality, evidence-based, culturally-suitable medical and dental care, public health services, and behavioral health and substance abuse counseling to members of the Citizen Potawatomi Nation and members of other federally-recognized American Indian tribes and nations and Alaskan Natives.  The clinicians and support personnel comprising the CPNHS staff share the goal of eliminating the health status disparities which exist between American Indians and the general population of the United States, and focus on eliminating long-standing access barriers to health and human services experienced by the majority of Native Americans residing in central Oklahoma.

If you would like to learn more, please call 405-878-4693 or visit www.potawatomi.org/services/health.