The storied baseball program at Asher High School is known throughout the state by many coaches, regardless of the size of their school. Its 46 state championships in fall and spring baseball are a total that will be difficult for any other program to recreate. This isn’t to mention its holding the state record of 60 consecutive state tournament appearances. Asher, which is nestled in south Potawatomie County at the very southern edge of the Citizen Potawatomi Nation’s jurisdiction, has been under the stewardship of tribal member Shane Coker since 2005.

Coker, an alumnus and a descendent of the Curly family, came back to his hometown to take over a program that was, considering the team’s rich history, in need of a revival.

“Times have changed a bit in terms of the number of kids competing in baseball compared to when I was playing, but it was my hometown and the program that taught me how to deal with the challenges of life,” said Coker. “I agreed to take over for one year when I initially signed on, but I’m still here, so I guess that says something.”

A standout at Asher, Coker was the youngest player selected in Major League Baseball’s 1988 draft at the age of 17. Joining the Cincinnati Reds, he spent two years as the organization’s youngest player, playing in the Gulf Coast League and Florida State League.

“I was 18 when I went in, and looking back I should have probably gone to college,” said Coker. “But it was my first time away from home, and though I knew pretty quickly that I probably needed more experience before I could cut it at the next level, I didn’t have the chance once I went professional.”

The National Junior College Athletic Association now allows a player to be released from a minor league baseball contract if they have played less than 90 days at a level no higher than Class A. During Coker’s time with the Reds’ organization, no such rule existed, essentially ruling out his chance to compete at the collegiate level. A torn rotator cuff ended his second season and his playing days. Though a relatively simple procedure with a rapid recovery time today, medical progress at the time meant that the injury was career ending. 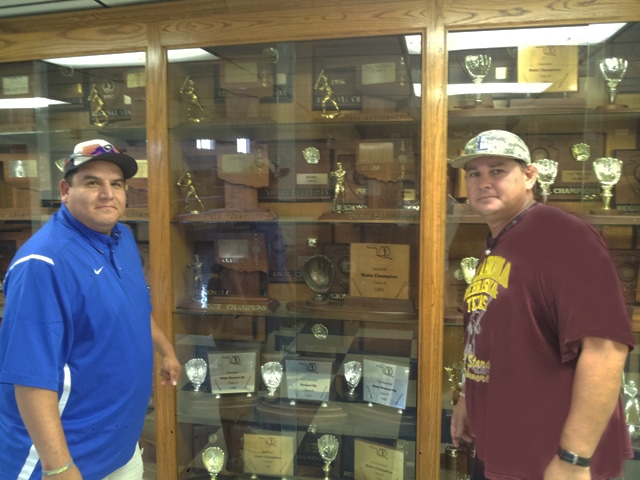 Returning to Oklahoma, he began classes at Seminole State Junior College, and while there was offered an assistant coaching position by a former Asher teammate at Prague High School.

“When I started doing that, training my mind to look at the game from a coaching perspective to a playing one, is when I realized I could see myself teaching and coaching,” explained Coker.

Completing his Bachelor’s Degree at the Central State University, now known as the University of Central Oklahoma, Coker spent time coaching at Prague, Varnum and Duncan. Entering his ninth year as the head coach at Duncan, he decided to just coach football, when the opportunity at his alma mater opened up.

Since 2005 the Social Studies and Physical Education teacher has helped reestablish the program’s reputation as a powerhouse in Oklahoma baseball. He was selected by the Oklahoma Baseball Coaches Association as the 2012 District Coach of the Year, and his teams have played in the past three state championship games, narrowly losing to the same team in each contest, Red Oak High School.

Recalling the details of the games, Coker elaborated. “It’s tough, to lose that way and to the same team, and I want to win. But looking at the number of teams who play baseball, and the small percentage of those who get to actually play in the state tournament, let alone the championship, I am proud of what we’ve done.”

With solid classes of experienced players returning, the CPN member believes that his team has a chance to play in the next four state championship games. Speaking in the lobby of the Asher High School gymnasium, Coker points to the overflowing trophy cases that line the walls and explained why he’d come home to Asher.

“Athletics taught me about life. Taught me about how a group of people can work for something bigger than themselves. I figured if I could give that same trait to some kids here, and if they can use that to get through their lives, then I’ve done my job.”