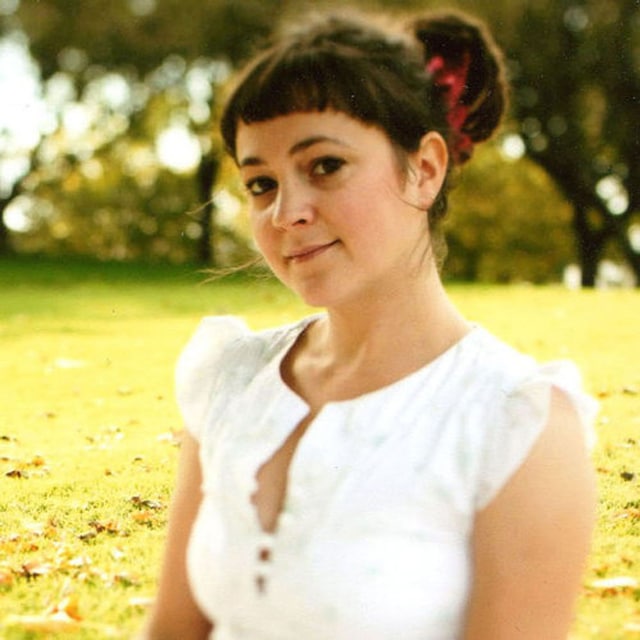 Welcome to this month’s edition of the Potawatomi Cornerstone.  In this issue I would like to introduce Carter Sampson, whose ancestral family is the Greemores. If you read the last edition of the Hownikan you are already familiar with her tornado relief efforts in Pottawatomie County.  This article takes it a step further with her music career.

Like many of our tribal members, Carter’s roots are embedded in music. Having the late great Roy Orbison as a cousin this talent was bound to end up in someone’s blood in the family.

At the age of fifteen Carter picked up her first guitar and never stopped playing. Since then she has recorded three albums, received several awards for her singer-songwriting abilities, and is currently participating as a mentor at the Rock & Roll Camp for girls in Los Angeles after which she will resume her tour.

Carter composes and sings a variety of music ranging from bluegrass to traditional folk songs reminiscent of Woody Guthrie, easy listening and adult contemporary. But no matter how you catalog it, when she belts out a tune, you are definitely listening to something special from an accomplished artist.

Her first album, Fly over the moon,” came out in 2004, with twelve songs. In 2009, her second album, “Good for the meantime,” included eleven songs. And her more recent album, “Mockingbird Sing,” released on 11/11/11, an album in which friends and fans came together to help her record the album “old school” using an analog reel to reel tape recorder to capture the real sound not quite captured by today’s digital recording devices. There are twelve tracks on the album, eleven composed and arranged by Carter and the twelfth track, “John Hardy,” one of her favorite’s that was previously recorded by Woody Guthrie.

It is interesting to note that the song “John Hardy” was based on the life of a railroad worker that killed a man during a craps game and hanged in 1894 for the crime of murder. And though Woody Guthrie may have popularized the song in his time, a whole host of artists over the years have paid tribute to this classic including Manfred Mann, Bob Dylan, Joan Baez and Jerry Reed. And thanks to Carter, she gives new life to an old but classic song of Americana.

During this interview, Carter was in L.A. donating her time and talents to help out with girls, ages 8-17, at the Rock & Roll Camp for Girls. Originally starting in Portland, Ore. in 2001, the camp now serves over forty-five locations throughout the United States. It is a two-week non-profit camp that builds girl’s self-esteem through music and performance. They pick out an instrument, compose a song and perform it at the end of the session.  And though the days are long Carter has had the best time of her life working with these kids.

After a brief hiatus, Carter plans to resume her tour in her new RV. Starting in Santa Fe NM on August 13, she will be performing at the Cowgirl Hall of Fame. She will return to Oklahoma City where she will be at Grandad’s on the 17th. Her travels will take her east to Guthrie Green in Tulsa, Okla., on August 18, the Movie Lounge at Ft. Smith, Ark. on August 23 and to top off the month at the Fayetteville Roots Festival in Fayetteville, Ark. on August 24.  After that you will need to visit her web site at www.cartersampson.net for upcoming shows and if you are interested in purchasing her albums or individual downloads.  You can also view many of her performances on YouTube.

During her career, Carter has picked up a handful of accolades.  In 2012 she was named a Top 12 Finalist in the 2012 Mountain Stage NewSong contest and performed her song “Tomorrow’s Light” at the Lincoln Center in New York City. To note her talent, there were over 2,000 entries. Only twelve artists were selected and invited to play at the Lincoln Center. That same year she was named the best female singer-songwriter at the NW Arkansas Music Awards. In 2013, Carter was given an honorable mention in the Telluride Bluegrass Festival Troubadour Contest in Telluride, Colo.

Some of her performances include Amnesty International’s “Groovefest” in Norman, Okla. the Paseo Arts Festival in Oklahoma City, the OKC Festival of the Arts, the Illinois River Jam and the Woody Guthrie Folk Festival in Okemah, Okla.

I asked Carter about what  one of the most important aspects of her career is. She said that writing, to her, was one of the most important. Although performance is a thrill in front of a large crowd, writing is her inner strength. It is “the artistic process” she said. She has written a lot of songs, many that she hasn’t played in a long time and some, she admitted, would have to go back over and re-learn. The “biggest step” she said in composing music was when she started writing about her own life.

“Sort of like you can’t sing the blues unless you’ve been there.”  I said.

When asked about what being Potawatomi means to her, Carter didn’t hesitate. She said that it puts her “…on a spiritual level … where I’m from.”

Growing up she really didn’t understand. But now, in her travels, and meeting people Carter understands what her grandmother meant. That is she a Potawatomi and will always be a part a big family, no matter where and who you are.

If you know someone who has an interesting story, please contact me, at cclark@potawatomi.org.