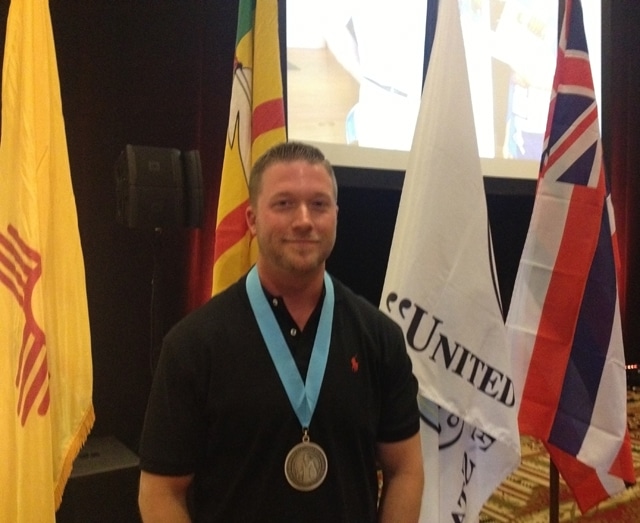 Blake Norton, archivist and curator for the Citizen Potawatomi Nation Cultural Heritage Center was recently recognized by the Association of Tribal Archives, Libraries and Museums with the Archives Institutional Excellence Award.

Norton has been with CPN for eight years and is responsible for creating and maintaining a repository for the Nation’s archive and research collections. The Tribal Archive and Research Division retains the tangible keys to the spiritual, historical and cultural aspects of the Citizen Potawatomi Nation and its Neshnabek brethren.

“With the continued and esteemed support we receive from tribal administration, the community and colleagues, I envision the Citizen Potawatomi Nation Cultural Heritage Center to be the largest repository and respective research center of Citizen Potawatomi and Neshnabek culture and ethnology,” said Blake Norton. “We have the opportunity to utilize the valued resources we have to create and be at the center of a cultural preservation network that assists in educating and interconnecting all Potawatomi and Neshnabek communities.”

The collections, most of which are one-of-a-kind, include historical and cultural documents, manuscripts, maps, photographic and genealogical material, and various forms of multimedia.

The Mezodan Research Center and Library, created to unite the Nation’s diverse collections with the tribal population and facilitate the education and edification of culture, history and heritage has more than 7,000 mixed-media resources. The Mezodan Library houses and makes accessible one of the most diverse collections of Eastern Woodland ethnology, language and history in both the region and among tribal libraries nationwide.

“I am humbled and filled with a great sense of pride knowing that we as a team, the Tribal Archive and Research Division and CHC staff, are fulfilling our mission of preserving and honoring the past by educating current and future generations,” added Norton.

The Tribal Archive and Research Division is presented the Archives Institutional Award in recognition of its exemplary programs that are sparking a renewed cultural awareness, perpetuating historical ties and cultural traditions for future generations and strengthening the heritage of Potawatomi people

The Archives Institutional Excellence Award recognizes indigenous archival organizations that demonstrate a significant commitment to the preservation and use of documentary heritage. Nominees are evaluated on their effectiveness in improving the documentary record through identifying and ensuring the preservation of records relating to tribal communities and topics; demonstrating success in raising public awareness of the importance of improving documentation; using innovative approaches to identifying and acquiring the records of tribal communities/topics; or using effective and appropriate approaches to making records available to a broader public audience.

Past recipients are the St. Regis Mohawk Tribe, the Seneca Tribal Archives and the Colorado River Indian Tribes Library.