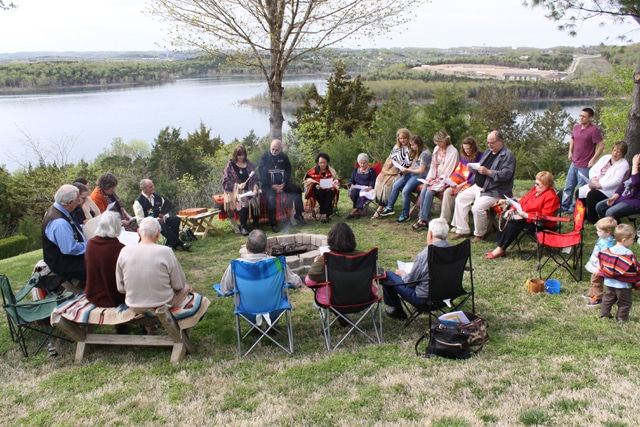 An aspect of traditional Potawatomi culture, the naming ceremony, has reemerged in recent years. Traditionally, Potawatomi believe that when a child is born, the Creator cannot see their face. In order to show the child to the Creator, the tribe would have a ceremony and the child was given a name.

Centuries of forced removals and interactions with Jesuit missionaries curbed the practice, but in an effort to strengthen our tribal bonds, members of the Citizen Potawatomi Nation have conducted several ceremonies in recent years.

Before a naming ceremony takes place, an individual seeking to be named must find two sponsors, a man and a woman, who will go through the ceremony with them. The sponsors are like godparents, and their role is to watch over the individual being named throughout their life.

To properly request a name, a person should give a gift of tobacco to  the person they are requesting name them. In order to give a name, a person asks for a little background on their life and interests. When naming a child, it is important to remember that you don’t give a title like “Little Bunny” that they may outgrow. Instead, sponsors should give one their recipient can aspire to as they become adults.

Prior to the naming ceremony, the person conducting the naming ceremony will smudge everyone who is participating with sage in order to cleanse the mind and spirit of negative energy. The ceremony takes place in a circle, and upon entering from the east, individuals give an offering of water and tobacco with their left hand. A fire burns in the middle while participants, both sponsors and those being named, offer prayers and tobacco to the four directions while walking clockwise around the flame.

The naming process can vary, but generally the person conducting the ceremony tells a little bit about those seeking to be named and offers a prayer to the Creator. The names are then given when an eagle feather is laid across the chest of each participant. Their Potawatomi names are spoken to the four directions, and everyone leaves the circle to the East.

The final portion of the ceremony, the post naming meal, is extremely important. Breaking bread with those who have named you is key to completing the process.

In the times before the removal period, elders of each family would conduct naming ceremonies for newborns and young children. The fact remains that after decades of lost practices, many elders do not have Potawatomi names themselves. Therefore, in the spirit of the older ways, we believe that once a name has been bestowed on you, you have the responsibility of being  naming, no matter your age.

If you’re interested in learning more about how to get a Potawatomi name, please contact the Language Department by visiting www.potawatomi.org/lang.