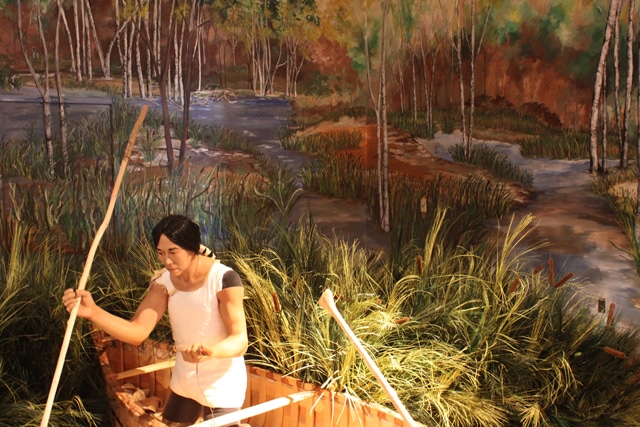 Work at the Citizen Potawatomi Cultural Heritage Center continues on a number of exhibitions, part of a multi-year project to educate tribal members and the visiting public on the history of the Potawatomi and Neshnabek.

A new exhibit at the CHC is the Marine Exhibit. The exhibit depicts a Potawatomi man spearfishing from a birch bark canoe on a Great Lakes waterway. The display contains detailed examples of tools and techniques used by the Potawatomi to survive and prosper in their traditional homes near the Great Lakes.

The vignette serves as the center piece of the larger multi-sensory marine exhibit that will include cultural and historical narratives, imagery, artifacts, media and digital interactives. All will exhibit the symbiotic bond that the Potawatomi had and still have with the Great Lakes.

Cultural Heritage Center Archivist and Curator Blake Norton explained the display’s significance, saying, “This area is meant to exhibit Neshnabek and Potawatomi life both chronologically and culturally from pre-history to removal. The exhibit will touch upon spiritual, cultural, social and historical aspects of the Potawatomi and Neshnabek derived from a marine environment.” 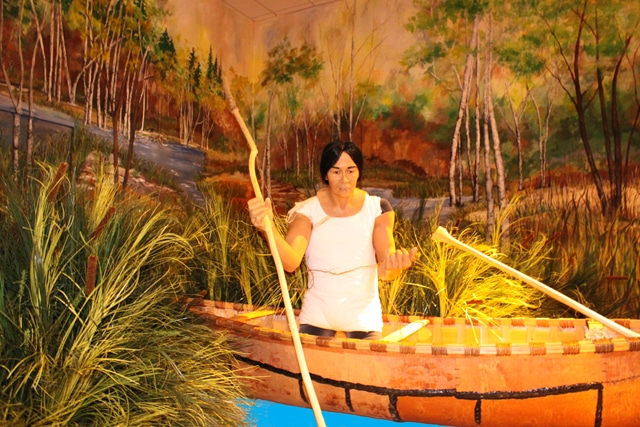 The Marine Exhibit is part of the Potawatomi Lifeways displays that dominate the south side of the gallery. This area is meant to exhibit Neshnabek and Potawatomi life both chronologically and culturally from pre-history to removal. Moving to the north side of the gallery, we will explore the tribe’s arrival in Missouri, Iowa and Kansas, eventual migration to, effects of and prominent rise in Oklahoma, up to the present.

Said Norton, “The goal of the gallery is to depict defining eras that helped preserve and continue to reconstruct Citizen Potawatomi life and culture.”

According to Norton, the marine exhibit’s construction is progressing as planned and should be completed sometime in early 2014. Once finished, the Marine Exhibit will be a permanent fixture of the Citizen Potawatomi Cultural Heritage Center, but is being built to allow for future modifications.