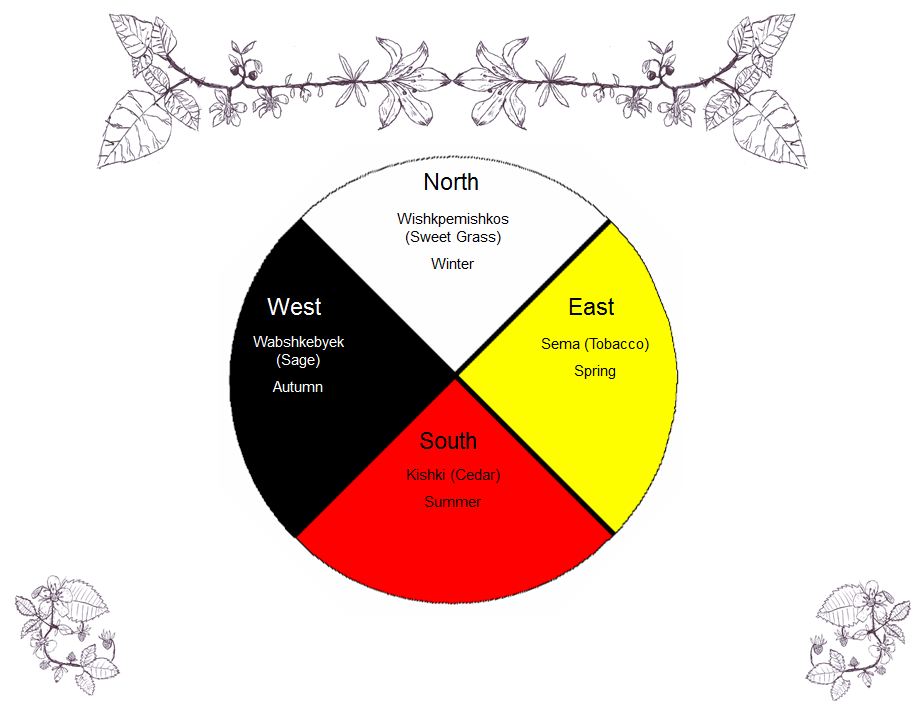 Many Native American tribes recognize the significance of the medicine wheel, the colors and directions that are associated with them.

For the Potawatomi, the East is the direction of new beginnings and life, and signifies springtime. It is associated with the color yellow and the Potawatomi medicine of sema (tobacco). As an elder once said, “Sema precedes all things,” meaning tobacco is used by the tribe as a blessing before starting a ceremony or gathering.

South is the color of red, and signifies the summertime, when the weather is warm. It is the direction of abundance and plenty, and is the direction of the medicine kishki (cedar). Kishki is used to prepare for ceremonies, and there is a tradition of a trail of cedar from the fire to the sweat lodge. Pipes belonging to tribal members that were made of cedar would be laid on the ground between the two structures. Kishki is also mixed into tobacco to provide enough smoke to get the attention of the spirits who will see the prayers of the Potawatomi. Cedar boxes are also used to keep mites and other insects off of ceremonial eagle feathers.

West is the direction of the medicine wabshkebyek (sage) and its color, black. Sage is used in the practice of smudging, where smoke is wafted over a person to rid the body of negativity. In fact, prior to CPN Legislative meetings, it is not uncommon for a smudging ceremony to take place prior to representatives and government officials commencing regular business. In the case of eagle feathers, smudging is used to cleanse the feathers. West also signifies the season of fall and of endings, and Potawatomi beliefs traditionally held that once a person passed on, they moved in that direction. This is why traditional burial ceremonies held that bodies were passed out a Western window.

North on the Potawatomi medicine wheel is the color of white, and is the direction of elders and winter time. In the days when the Potawatomi lived in their traditional lands near the Great Lakes, the winter snows were thought have a cleansing power on the land. This is also the time of the year that the spirits are asleep, which is why winter stories are only told during this time. White’s medicine is wishkpemishkos (sweet grass), which attracts positive spirits and used after a smudging of sage.

The medicine wheel is a teaching tool that is intended to help people remember these important and significant aspects of life. Life itself is viewed not as a line, but rather a cyclical thing that has its own seasons of life, death and renewal.