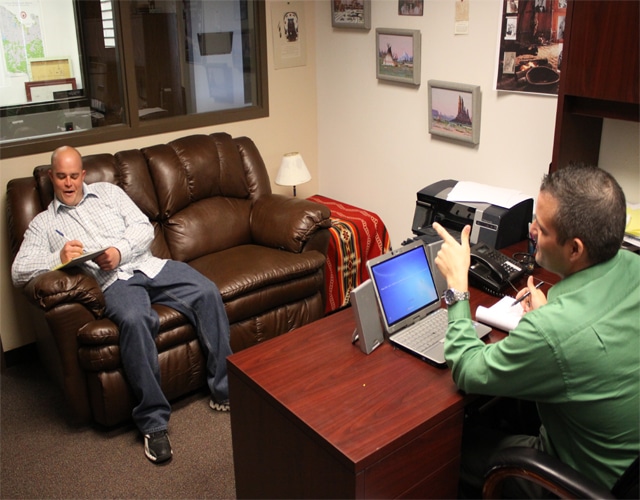 Learning a language is difficult in the best of circumstances. Now, imagine the difficulty in keeping a language alive amongst a very select portion of the population. More so, ponder taking on that challenge with the knowledge that if the federal government decides to cut funding for your tribe, it can justify its actions by pointing out that a common and distinct language no longer exists.

“In the 1950s the federal government started trying to terminate tribes. One of the criteria for whether a tribe was still a tribe was whether anyone still spoke their language,” explains CPN Language Director Justin Neely. “The language is the glue which holds us together as a people. It’s our stories, traditions, ceremonies, art, dance, history, blood, and language which make us Potawatomi.”

The CPN Language Department, more specifically its teachers, are key figures in the ongoing struggle to keep the language alive. In the current political atmosphere, the reality of government cost cutting is all too real, and at some point funding for tribes may come under scrutiny by politicians looking to rein in spending.

Neely, along with Samuel Navarre and Randy Schlachtun carry the teaching load for Citizen Potawatomi Nation. The three descendants of the Navarre family all came to their roles as teachers in different ways, but all seem to have been similarly inspired.

“Other tribes wouldn’t consider the way I was raised as traditional, and I wouldn’t either,” said Navarre. “However, I was always taught my family’s history from my immediate relatives.”

“My grandmother always let it be known that we were Potawatomi and that we should be proud of who we are,” added Schlachtun.

Raised in non-traditional home environments, the CPN language teachers were all close to adulthood when the notion of learning more about their culture set in. Neely credits an interest in genealogy during his teenage years for sparking interest in his Potawatomi heritage, which lead him to begin attending the tribe’s regional meetings in Kansas. Navarre credits his interactions with elders of the Kiowa tribe as the catalyst, after they encouraged him to learn about his Potawatomi heritage.

Through experiences like these, the CPN teachers all realized the importance that the language played in defining the tribe’s unique culture.

“I wanted to feel like more than just a descendent of Potawatomi people,” explained Schlachtun. “So I decided to start learning the language that made me proud in being Potawatomi.”

Neely received an Endangered Language grant from Yale University, which he used to fund his studies under instructor Don Perrot at the Hannahville Potawatomi Indian School in Michigan. Navarre and Schlachtun were both students of CPN’s language department before eventually becoming instructors.

With most native speaking Potawatomi having passed away, less than one percent of all members of the Seven Bands of Potawatomi in the U.S. have an extensive knowledge of the tribe’s language. Many language teachers throughout the tribes are like CPN’s, having picked it up later in life. Yet the commitment they’ve shown in learning such a distinct language is heartening.

“We are at a critical time in our history. Our language and many of our traditions are on the verge of disappearing forever,” said Neely. “My goal is to see our language a vibrant expression of who we are. I want our people to take pride in being Potawatomi and to feel a sense of belonging with the language and the culture.”

Neely is fond of reciting the Seven Fires prophecy, which states that there will be a time when the old ones will have passed, and the new people will have to pick up what is left behind and carry on.

Neely, Schlachtun and Navarre are doing their part in fulfilling this prophecy, but there is only so much that teachers can do, especially if they have no students.

“I have a small, but loyal following in one of my online classes,” said Navarre. “They’ve been participating throughout the two years we’ve been having the class.”

But Navarre’s core group of students aside, participation remains limited when compared to the online and in-person resources available to CPN members to learn their language.

According to Neely, “When they’re younger, people feel they’re too busy what with t-ball, Girl Scouts and other activities. And as adults we become too self-conscious, embarrassed of making mistakes. But you just have to make it a priority, which is something we should do to leave something for our children and grandchildren.”