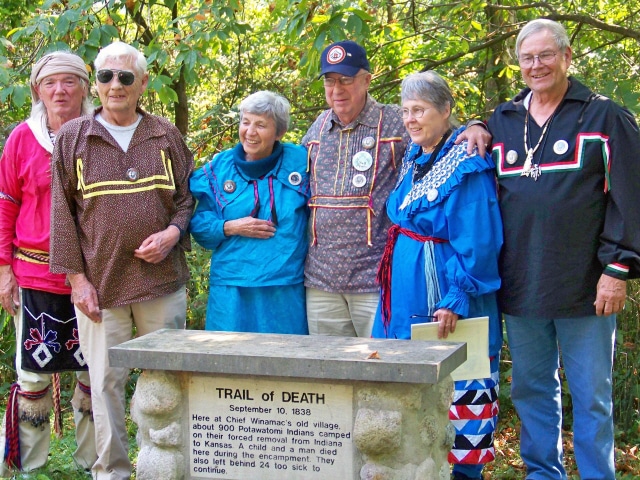 The 6th Trail of Death Commemorative Caravan for the 175th anniversary of the 1838 Trail of Death will be Sept. 23-18, 2013, immediately following the Trail of Courage Living History Festival Sept. 21-22. The Potawatomi Indians were rounded up and marched at gunpoint down Rochester’s Main Street Sept. 5, 1838. So many died, it became known as the Trail of Death. This was the same time as the forced removal of the Cherokees , known as the Trail of Tears, from the Smoky Mountains to Oklahoma. Nearly every tribe suffered a forced removal. This caravan focuses on the Potawatomi but is a memorial to all the removals and is a spiritual journey.

Every five years a Trail of Death Commemorative Caravan is organized to retrace the original 1838 route from Indiana to Kansas. It is 660 miles and crosses 26 counties in Indiana, Illinois, Missouri, and Kansas. The first caravan was in 1988 for the 150th anniversary of the 1838 removal. George Godfrey, a Citizen Potawatomi, and Shirley Willard, Fulton County Historian, have been partners in organizing and leading the caravan of cars, trucks and campers. When the price of gasoline got too high to make traveling with RVs and campers, they switched to cars, staying in motels at night.

Starting from Chief Menominee monument south of Plymouth, the Trail of Death route follows the Michigan Road through Argos, Rochester and Logansport. The group will be hosted to lunch at the Cass County Museum, which is located in Dr. Jerolaman’s house. He was the doctor on the Trail of Death. They will spend the first night in Lafayette, and visit with Purdue’s Native American Center and the Great Lakes Native American Cultural Center.

Over 80 historical markers designate the Trail of Death campsites every 15 to 20 miles. All the markers have been erected by volunteers, including 30 Boy Scouts and Girl Scouts, 4-H, historical societies, individuals, and Potawatomi families. Also the Trail of Death has been marked across Indiana and Kansas with Potawatomi Trail highway signs. Efforts to mark the trail with highway signs continue in Illinois and Missouri.

New Potawatomi Trail of Death Regional Historic Trail highway signs will be dedicated at Danville and Monticello, Illinois; from Brunswick to DeWitt, Missouri; and from Kansas state line to Sugar Creek Mission in Linn County, Kansas.

The Trail of Death route takes the caravan through Danville, Springfield, Jacksonville, Exeter and Quincy. It crossed Missouri on Old 24 through Palmyra, Paris, Moberly, Huntsville, Keytesville, Independence, and Grand View. A new historical marker will be dedicated this year at Spring Hill, Kansas. The trail winds down at Paola, Osawatomie and Sugar Creek Mission. The former mission is now the St. Philippine Duchesne Memorial Park, honoring St. Philippine who was canonized in 1988, the first female saint west of the Mississippi River. She was an elderly missionary to the Potawatomi in 1841 and was given the name of She Who Prays Always.

Another new historical marker is at Trading Post, Kansas, and will be dedicated by the caravan members the last evening of their trip. They will spend the night in a motel in Osawatomie, Kansas, and bid farewell to all Sunday morning Sept. 29, each person heading for home.

For more information and a registration form, see www.potawatomi-tda.org. Or contact Shirley Willard at 574-223-2352 or wwillard@rtcol.com.