The past is shining bright at Sacred Heart Mission 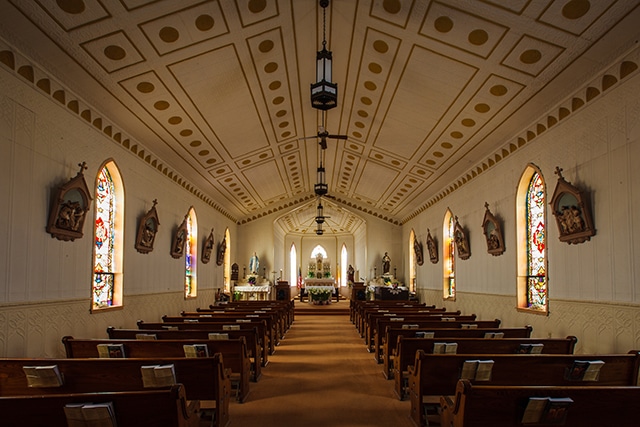 More than 130 years ago the Potawatomi Tribe and a French Benedictine Priest struck a deal to build a mission and school for Native Americans. Today, most of the original infrastructure has deteriorated due to the sometimes fierce Oklahoma elements, a fire and even vandalism.

The bakery, a two-story log cabin and two cemeteries are all that remain of what was once a thriving and growing Catholic community. The church, which was built in 1914, is the only building that is used today.

Sacred Heart church is a small church located atop Bald Hill. The church was built under the pastorship of Father Fuerstenburg and cost about $15,000. Large painted glass windows were created for the church and most of the carpentry work was done by parishioners. Thanks to the hard work of a few volunteers, the windows, which are irreplaceable, shine as bright now as they did when they were installed in 1914.

“Since the installation in 1914, the windows at Sacred Heart church have not received proper maintenance,” said Father Adrian. “Each window is considered to be an original piece of art and each window has a significant historical and religious meaning.”

It was a lengthy process to restore these pieces of art to their original condition. First, the windows must be removed from the building and transported to the workshop for repair. It required four to five volunteers to remove the windows and transport them. The pieces of the window are secured around the edge and held together with duct tape before transport.

“Previous caretakers had noticed the windows needed to be repaired and had used plaster around some of the corners and glass,” added Father Adrian. “It is quite a process to remove the windows, clean them and replace any missing pieces and put them back in the church. We’re very appreciative of those who have donated their time.”

The restoration began in fall 2009 when Father Adrian asked a local artist to take a look at the windows to determine if they could be restored.

“I’ve been working with stained glass since 1984 and since I knew how to put them together I figured I could restore them,” said Jan Pasienski. “It was a hard decision to make to accept this project since it was a huge commitment on my part and I didn’t want to let Father Adrian down.  Sacred Heart is an historic parish and I felt that since I had the ability and the time it would be a shame to let these beautiful windows pass beyond repair. “

Once the windows had been removed from the church volunteers cleaned the windows, replaced broken pieces and reinforced the frames.

“The most difficult part of the restoration was removing all the substances that were used to maintain the windows over the last almost 100 years,” added Pasienski. “Concrete, plaster, putty, tar, liquid nails and silicone glue were used to keep the windows in place. Although it was extremely difficult, if it were not for the attempts to save the windows, they would not be around for us to do a proper restoration.”

It took the volunteers more than 600 hours, each of them doing what they could when they could, to get the job done. In addition to the work done by Jan, Mike Piggott and Terri Gilley were very involved in the restoration process. 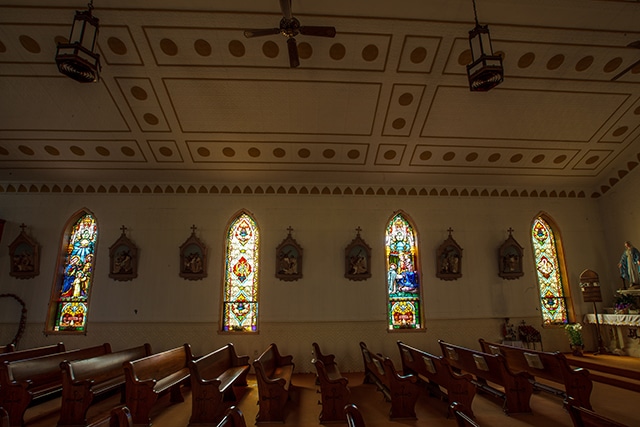 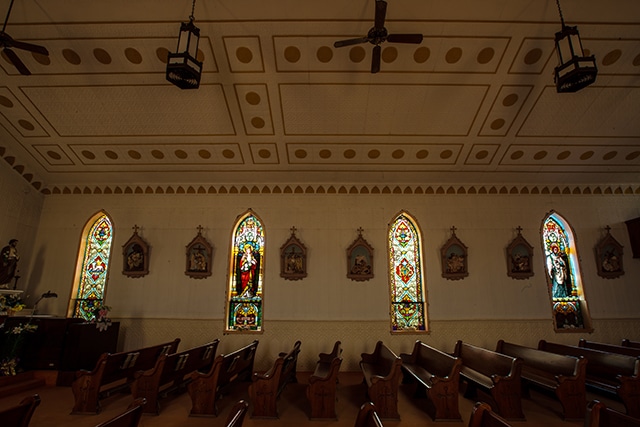 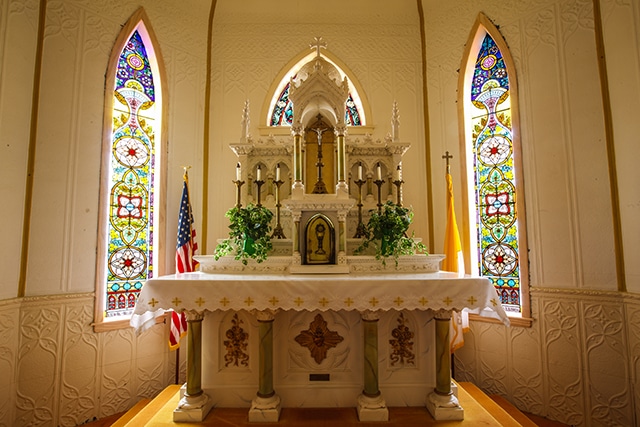