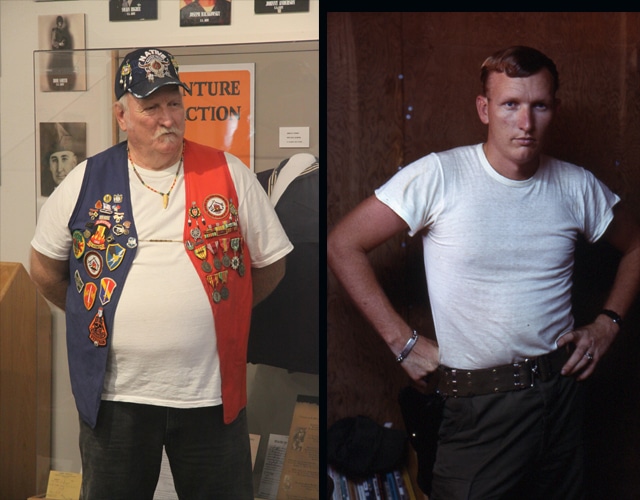 Shawnee, Okla. – A decade after the invasion of Iraq and nearly 12 after the start of the war in Afghanistan, another generation of American veterans is returning to the United States in need of support. The most frightening aspect facing current returnees is that in 2012, suicides by veterans outpaced casualties of those in the war zone.

While services like the U.S. Department of Veterans Affairs aim to help vets from current and previous conflicts, the VA’s paperwork can be overwhelming. In order to help Native American veterans with the system, the Oklahoma Department of Veterans Affairs established the TRIP program. The training program, which is certified by the federal government, teaches tribal representatives the processes of helping their veterans gain access to VA assistance. CPN’s own Clyde “Rowdy” Yates is the tribe’s Veterans’ Service Officer, and was one of the first three in the entire state of Oklahoma in 2009.

Yates, a member of the Wilmett family, is a Vietnam veteran. He was a member of the elite Radio Research Unit of the Army Security Agency. Still unable to speak about some details of his assignment, he has dedicated the last few years to helping recently returned vets and those from previous conflicts with VA applications. His role is purely voluntary, and while he receives support from the tribe and an office in the CPN Employment and Training Building in Tecumseh, Yates is unpaid for the work.

For those returning from the conflicts in Afghanistan and Iraq, Yates hopes to provide them with some guidance that his generation missed upon their return from Vietnam. His advice to them is to put their experiences down on paper so they can be dealt with in a productive manner, and not return as flashbacks. The notion of PTSD is no longer the taboo it once was, and Yates speaks openly about the need for returning soldiers to get their memories out rather than trying to suppress them by will power or other means.

He relates the sobering statistics for Vietnam vets, pointing out that “around 30 percent of the three million Vietnam veterans are still alive. Those are the ones who came home, and there are a lot of suicides and deaths from Agent Orange. I’m trying to show these younger guys that we’ve tried it our way, going it alone and it isn’t the best approach. That’s why I tell them to write their traumatic and physical experiences while in military service down on paper, so they can deal with it and not have it creep up on them.”

The return of Afghanistan and Iraq vets has put an increased focus on the Veterans Administration and its treatment of the nation’s warriors. At the same time older generations of veterans now require the care typical for an aging population. Yates experience working with the VA comes in handy in these cases. Especially when he points out that the VA recently changed its position from a time when it only treated injuries and illnesses sustained during military duty.

“Serving Native Americans is my motivation, especially if I can act as a go-between for those veterans and a government they may not fully trust,” said Yates. “Relating to me, as a fellow Native American soldier, helps in a way. Though officially, my role is to serve CPN vets, then other Native Americans, and then all veterans. But I’ll try to help anyone I can if they get in contact with me.”

That is the key; the outreach by veterans. Those who have offered the last full measure of sacrifice for the country deserve access to the benefits they were promised.

“I can help vets and dependents with first time claims, dependent and DIC benefits, funeral service related claims and denial appeals. I just need them to get in touch with me,” said Yates.

If you are a veteran, or know one, please encourage them to get in contact with the CPN Veterans Service office.

Contact Clyde Yates by phone at 405-598-0797 or via email, cyates@potwatomi.org. For Oklahoma- based Native American veterans, more information is available through the American Indian Program at the Jack C. Montgomery VA Medical Center in Muskogee, Okla.