The Seven Grandfathers – A Potawatomi story 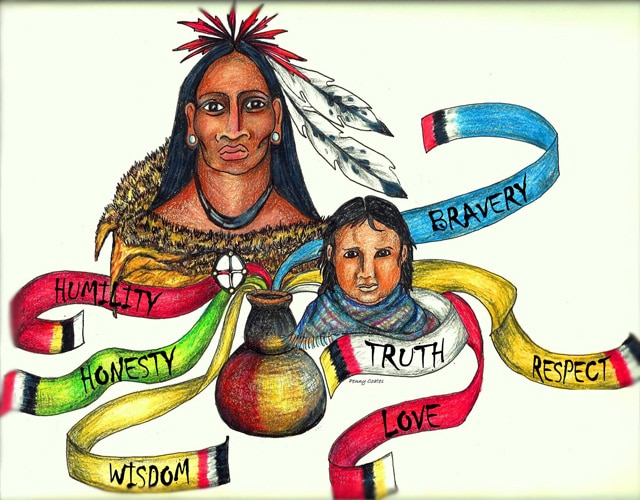 In the early years, the Earth was hard on the people. Many died from diseases and others just passed on from the tough lives they lived. The Seven Grandfathers were powerful spirits given the responsibility to watch over the people by The Creator.

Seeing how hard it was for the people, the Seven Grandfathers sent their helper Shkabwes amongst the people to find one who could be taught how to live in harmony with the world. Six times Shkabwes searched amongst the people and found no one, but on his seventh trip he found a newborn baby who was unaffected by the hardships of the world who would be able to learn from the Seven Grandfathers.

Taking the boy from his parent’s tent while they slept, Shkabwes left gifts of tobacco and a piece of his clothing to show them he had not been taken by a wild animal and would one day return.

When Shkabwes presented the baby to the Seven Grandfathers, they said, “He is too young to hear our teachings or gaze upon us. To do so would be fatal for him. Take him out and show him the four quarters of the universe and then return. When he is stronger, he will learn.”

Shkabwes showed the boy many things across the four quarters of the universe. It took many years, so when they returned to the lodge of the Seven Grandfathers, the boy was seven years old.  As they stood before the entrance, the boy realized that Shkabwes had been his uncle all along. Uncles help guide us in our journeys through life, and Shkabwes had done the same for the boy.

The Grandfathers told the boy of his parents and how they expected him to return one day and what he would teach the people when he returned. They then pointed to a water jug, painted for the four directions and colors of people the Creator had made.

“North is white, West is black, red is South and yellow is for the East,” they told him. Then they each placed a gift in the water jug, sharing it just as one does in the peoples’ ceremonies today.

The first gift was wisdom, which would allow people to cherish the knowledge they attained. The second was love, because to know it was to know peace. Then, to honor all of the Creation, they gave respect. Bravery in the face of the foe was next, then honesty to face a difficult situation with pride. Humility to know ones place in the expanse of the Creation came next, while the gift of truth to know and understand all of those things came last.

“But remember,” they warned the boy, “for in the world each gift has an opposite, like evil is the opposite of good. You must teach them carefully in the right way to use each gift.”

Shkabwes took the boy and his water jug back to the people, but by this time the boy was a fully grown man. In the spirit world, time does not pass, but the boy had been gone many years. When he entered his old village, an old couple stood in front of the rest of the crowd and recognized the man as their son. They had understood the gift of tobacco Shkabwes had left when he took the boy and had always known he would return one day.

Then the man taught the people about the gifts of the Seven Grandfathers, and how they had to be careful of their opposites. He also taught them that the physical world also had a twin in the spiritual world, and that a fit body was as necessary to harness one as a strong mind was to harness the other. Using the gifts and understanding of the directions painted on the water jug, the people began to adjust to life and its daily challenges. Diseases and accident didn’t claim as many lives because the people learned to live in the delicate balance that comes in living in harmony with the Creation.

The lesson of the story is that beginning at a very early age, we must teach our children about the world. They already aware of the things that are happening around them, so we must instill the values provided by the Seven Grandfathers in them that they will need to guide them along life’s uncertain path.