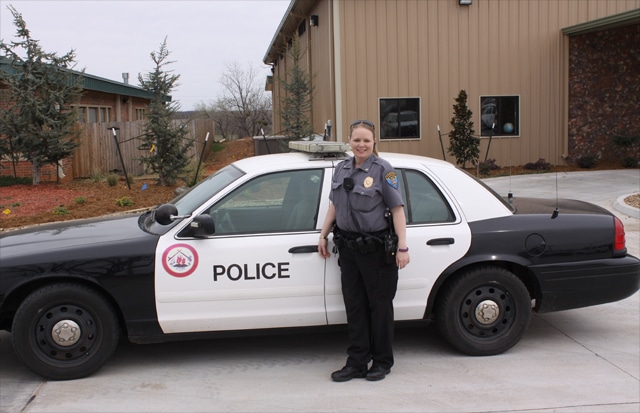 Police officers are tasked with running in the direction of danger when everyone else is heading the other way. Psychologically, this leads many people, especially children, to automatically associate police officers with negative experiences.

“Many kids only see the police in negative circumstances, and that affects their perception of us,” explained CPN Community Resource Officer Kandi Cumbie. “This negative association has repercussions down the line when they don’t feel comfortable calling the police when we are needed.”

In an effort to show the positive sides of police work, the Citizen Potawatomi Nation’s Chief of Police, Dr. Jim Collard, created the position of Community Resource Officer after a discussion with Officer Cumbie following her move to CPN PD in June 2012.

“The community resource officer position is about connection and education,” said Dr. Collard. “Connection in the sense of allowing the most vulnerable segments of our population to have a direct line of communication with the police. And education in the sense of helping our citizens learn how to better protect themselves and their families.”

Cumbie, who has family throughout the Pottawatomie County-area, is a native of Baytown, Texas. She worked as a patrolwoman for the Cleveland (Texas) Police Department for two years before moving to the CPN PD in June 2012.

“While we didn’t have a community resource officer specifically at my last employer, we made an effort to get out in the community and meet with people in positive circumstances,” said Cumbie. “After moving to CPN, I had a discussion with Chief Collard about those interactions with the community and he thought that creating the position was a good idea.”

Officer Cumbie’s work takes her to a number of local schools, where she raises awareness on issues affecting children and young adults. Educating students about the dangers of drinking and driving, teen dating violence and sexting is a proactive approach to policing that intends to keep adolescents from being victims in the first place. With the opening of the P.L.A.C.E., Officer Cumbie will also be conducting classes there.

She also works closely with the CPN House of Hope, a tribal sponsored department that serves victims of family violence, sexual assault and human trafficking. 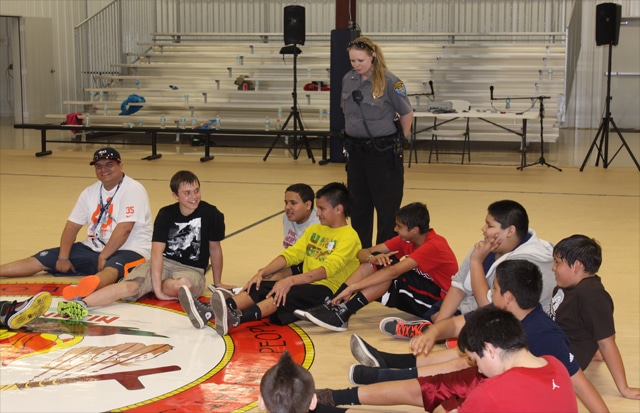 “The Citizen Potawatomi Nation House of Hope Family Violence Program is partnering with the CPN P.D. in an essential collaboration between the departments and the community,” said Officer Cumbie. “We are in the beginning stages of the partnership and we believe that working together face to face will build trust.”

Community resource officers are becoming increasingly common positions at across the country as police departments assign specific officers to provide concentrated law enforcement and outreach practices of their communities.  If you would like Officer Cumbie to visit with your group, school or other organization regarding her work as CPN’s Community Resource Officer, please contact the Citizen Potawatomi Nation Police Department at 405-878-4818.