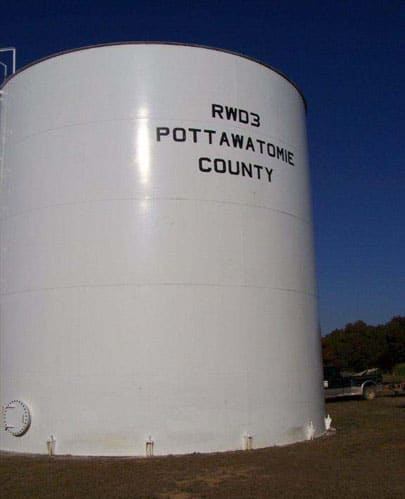 A delegation from the Osage Nation recently visited Citizen Potawatomi Nation headquarters in Shawnee to discuss their preparations for a water resource plan. CPN’s experience in developing its own water plan is seen by many tribes as a forerunner to their own preparations, especially in light of the recent drought in Oklahoma.

A grant from Administration for Native American’s, along with in-kind services from the United States Geological Services and tribal funds, the Citizen Potawatomi Nation is currently conducting a three year comprehensive water study. The study began in September 2011 and once complete in 2014, the tribe will create an all-inclusive water plan to sustainably manage growth and water resources within its jurisdiction. The research is headed up by USGS Senior geologist, Dr. Chris Harich.

Richard Kunze, Director of CPN’s Public Works and Utilities, gave the Osage Nation guests an overview of how CPN was able to acquire a rural water district.

“We serve around 800 customers in southern Pottawatomie County through about 275 miles of line,” noted Kunze. “That’s in addition to the water we sell back to Oklahoma City through the OKC-Atoka water line that runs through our land.”

Rural Water District 3, which serves 60 percent of the Pottawatomie County’s geographic area, is the only tribal-owned enterprise that is a public utility. The district was in dire economic straights when the tribe took over in October 2007. Since then, the district’s water treatment plant has ramped up production by twice the original output and many of the defaulted loans used to keep it operational at the time of purchase have since been paid off.

CPN’s previous experience working with the state’s most valuable resource has it ahead of the curve when many entities are just beginning to grapple with issue of water rights.