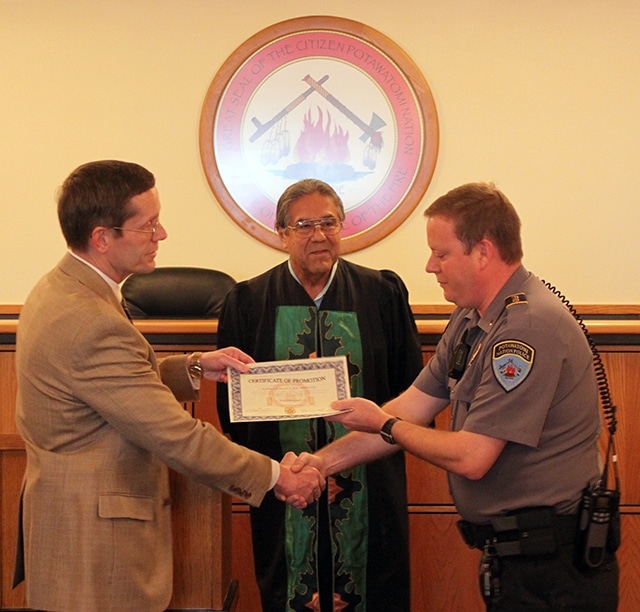 The Citizen Potawatomi Nation Police Department recently held a special ceremony to promote Detective Lee Minick to lieutenant. Minick has served the CPN Police Department since 2006 as detective and will continue in that role while also taking on the responsibilities of Lieutenant.

A native of Beaumont Texas, Minick began his Oklahoma law enforcement career in 1999 when he began working for the Seminole County Sheriff’s Office.

“I became a police officer because I wanted to be out in the community helping people,” said Lieutenant Minick. “I enjoy assisting our citizens and this promotion reflects my work in this. I have more responsibilities with my new rank, but I look forward to it, and really want to thank everyone for their support.”

Minick serves as the CPN PD’s lead detective, a duty requiring him to investigate crimes ranging from burglaries, incidents of domestic violence and bogus check cases. Minick also assists the State of Oklahoma’s Office of Inspector General in suspected cases of food stamp fraud as well as other investigations needed by surrounding agencies on offenses that start on tribal land and spread to other municipalities.

“Lee’s investigative work allowed us to collect restitution on around 50 percent of the forged checks we were investigating, even on cases that were four and five years old,”said CPN District Court Justice Phil Lujon during the promotion ceremony. “His assistance on a very important embezzlement case is another example of his contribution to tribal justice.”

The CPN police are a cross deputized with local law enforcement agency, meaning they are allowed to support and enforce the laws at a municipal, state, federal and tribal levels.

“I like working for the tribal police, as we’re cross deputized for tribal, city, state and federal jurisdictions,” said Minick. “While our primary duty is to ensure the security and safety of tribal members and property, the cross commissions with other agencies allows us to assist our fellow law enforcement agencies if the need arises.”