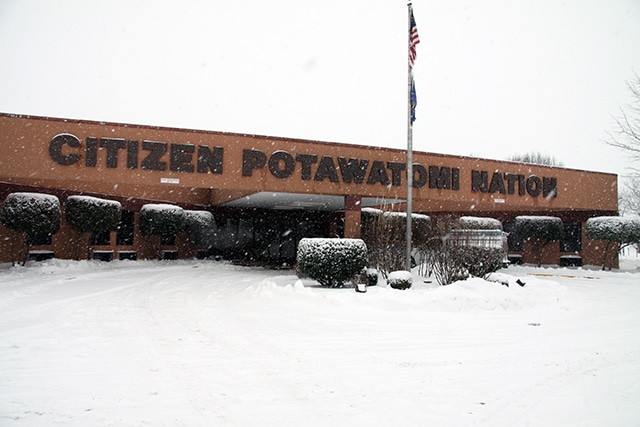 Oklahoma receives more than its fair share of significant weather events during any given year with everything from floods, wildfires, blizzards, tornadoes, drought and even earthquakes impacting the state. In 2011 and 2012 Oklahoma received nearly 40 disaster declarations and is one of only five states to have more than 100 disaster declarations.

CPN began working with FEMA in 2000 after it experienced a loss due to an ice storm after Oklahoma was hit by a crippling snow and ice storm. According to a report by the Oklahoma Corporation Commission, the storm impacted more than 120,000 homes, disrupted local water supplies, contributed to at least 27 fatalities and cost the state $170 million.

Tim Zientek has spearheaded the relationship between CPN and FEMA since 2000 and has contributed to several programs to enhance the preparedness of tribal emergency management departments and has worked to recoup the cost of disaster response for CPN.

“CPN works with FEMA to recover funds spent during disasters,” said Zientek. “The tribe spends on average about $100,000 per disaster that affects the nation. We work very hard to get as much of the eligible funds back as we can.”

CPN has taken a progressive stance on preventing and planning for disasters, which has made it eligible for preparedness finds, including a $750,000 grant to construct three community safe rooms. CPN was the sixth tribe in the United States to submit a pre-disaster mitigation plan, which was approved in 2008 and 2010 and includes a preparedness plan that takes into consideration all hazards the nation could face.

“The training I receive from FEMA has proven to be valuable in helping the Nation to prepare for disasters of all kinds and to help speed the process of recovery from disasters and in some cases either eliminate or at least lessen the impact of disasters,” said Zientek. “I became a FEMA certified instructor for all courses and am now one of the four instructors qualified to train-the-trainer for the tribal courses.”

“These two positions ensure the nation has a voice in the development of policy and direction to maintain a government-to-government relationship with not only FEMA, but on a national level as well,” said Zientek. “I was also involved in helping FEMA update and rewrite their Tribal Policy.”

The training and experience that Zientek has received and CPN’s commitment to the community have allowed the CPN Emergency Management to reach out to form partnerships with the surrounding local jurisdictions, state emergency management agencies and tribal emergency management agencies from across the state. These partnerships allow for a joint response to emergencies and disasters to share resources to better serve the communities we live in.