Cultural Heritage Center exhibit helps visitors connect with the past 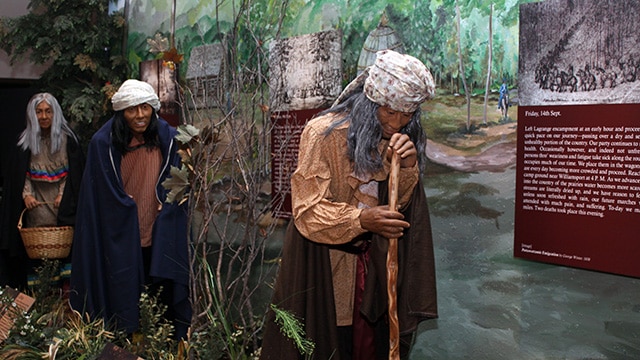 In 1838, nearly 900 Potawatomi began the 660 mile walk from Twin Lakes to the prairies of Kansas. Many Potawatomi died during the Trail of Death, mostly elders and children, and though the loss of life was great, there was also a loss of culture and history.

“A lot of Potawatomi traditions and culture were lost on the trail, simply because they had to keep moving forward,” said Kelli Mosteller, director, Citizen Potawatomi Nation Cultural Heritage Center. “We hope that by coming to the Cultural Heritage Center and learning more about their ancestors and the history of the tribe, tribal members will be able to revive those traditions and have a deeper understanding and appreciation for their culture.”

Citizen Potawatomi eventually settled in present day Oklahoma after living in Kansas for thirty years. Although there were some things on the Great Plains that the Potawatomi were familiar with, their new home was much different than the northern woodlands they had left behind.

“We receive numerous questions from tribal members regarding the traditional lifeway pre-dating removal,” said Blake Norton, Tribal Archivist and Curator, Citizen Potawatomi Nation Cultural Heritage Center. “Establishing a permanent residence and transferring cultural elements based within a woodland context to a relatively foreign prairie environment was difficult for those Potawatomi forced west. Many integral pieces of their existence could not be replicated and were essentially lost along the trail.”

The Potawatomi Trail of Death is one of the most well documented forced removals among Native Americans. A journal, kept by Emigration Conductor William Polke, and sketches, drawn by British-born artist George Winter, give an accurate account of the 660 mile removal from Indiana to Kansas.

The staff at the Cultural Heritage Center wanted to create something to represent the many different Potawatomi removals. The exhibit includes the Trail of Death and was created so that tribal members could experience removal and gain a better understanding of some defining moments in Citizen Potawatomi Nation history.

“Tribal members have a hard time connecting with this part of the past because of its tragic nature,” said Norton. “We wanted to create something that people can really put themselves into and be emotionally drawn through the story.”

There are four elements to the Removal exhibit, meant to draw in spectators on every learning level, to fully submerge spectators in the history of the removal period and the Trail of Death.

Element one, scenery and people:

A forty foot mural is painted along the back wall, acting as the backdrop for the exhibit. The mural was painted by Penny Coates and Sharon Catlege, both Citizen Potawatomi Nation tribal members and employees.

“Sharing in re-creating the Trail of Death in an artistic manner has been very humbling,” said Penny Coates, Citizen Potawatomi Nation. “Knowing the loss and devastation that my own people endured during the forced removal brings a deep sadness to my soul. With each brush stroke I felt I was telling our story of life.”

The exhibit includes five mannequins, all hand selected and dressed in clothing created by tribal member Gayla Mosteller. The prints and colors all reflect the traditional clothes worn by the Potawatomi during the early 1800’s.

“We wanted to correctly depict how those on the Trail would have looked, realistically illustrating that their clothes became tattered and many lacked shoes while walking across four states,” said Norton. “Despite the grueling conditions, they still marched with a strong sense of pride.”

The second element includes the sketches and diary articles from Polke and Winter, offering guests a first-hand account of daily life along the Trail of Death. A portion of one journal entry reads:

Left Encampment at Twin Lakes at half past 9 o’clk A. M. leaving behind on account of sickness of the chief San-ga-na, with his family consisting of thirteen persons, three of whom are very sick, and proceeded on our march. Messrs. Wheeler & Hopkins agree to furnish provisions during the sickness of the family, and until such time as San-ga-na may be able to report himself at the agency at Logansport, preparatory to his emigration west. The day was exceedingly sultry, and the roads choked up with dust. Travelling was attended with much distress on account of the scarcity of water. Reached Chippeway at sunset having travelled a distance of twenty-one miles—five miles further than it was the intention of the Conductor to have gone, but for the want of water. The number of horses belonging to the Indians is estimated at two hundred and eighty-six—the number of wagons engaged in the transportation twenty-six. Provisions and forage rather scarce and not of the best quality.

There are six journal excerpts and sketches from the Trail of Death included in the exhibit. The journal excerpts span the time period of Sept. 4 to Nov. 5, 1838, the full two months it took them to walk to Kansas.

The third element includes interactive maps, bringing the exhibit into the 21st century. The maps include information on treaties, settlements and the many removals the Potawatomi faced.

The Territory screen shows the ancestral range of the Potawatomi as well as the impact of treaty negotiations and land cessions between the Nation and United States over a twelve hundred year span [800-present].

The Village, Fortification, Settlement/Trading Post and Mission screens illustrate the vast and varied dispersal of these entities. Each of the village icons is identified with its respective headman, while the other icons show each establishment date.

The Removal screen shows numerous removals that the Potawatomi had to face; each with their associated dates, start and end locales.

The illustration and interactive are not complete representations of the twenty year removal period, but give guests an idea of how many removals the Potawatomi faced.

The last element is a narrative, which is printed on panels across the bottom of the exhibit. The panels explain the historical context of all of the elements of the exhibit.

These chronological panels begin in 1789 with several treaties with the U.S. Government and moves on to the 1830 Indian Removal Act. The second panel explains the negotiations between the Potawatomi and the U.S. government between 1835 and 1837. The third panel is a historical account of the Trail of Death. The fourth panel ends the timeline in 1867 when the Citizen Potawatomi signed the final treaty with the U.S. Government and settled in present day Oklahoma.

“We wanted to create something by the tribe, for the tribe,” said Norton. “All of the work was done by Citizen Potawatomi Nation tribal members and CHC staff.”

The staff at the Cultural Heritage Center hope that this exhibit will give guests a better understanding of the removal period so that they take interest in revitalizing and understanding the culture and tradition lost along the way.

“Removal was more than walking from state to state,” said Norton. “The Potawatomi were stripped of cultural elements and their way of life by day one. Hopefully this exhibit is a small step toward understanding and really comprehending what that means, while realizing the strength of and sacrifices made by tribal members to revitalize the cultural traditions seen today.”