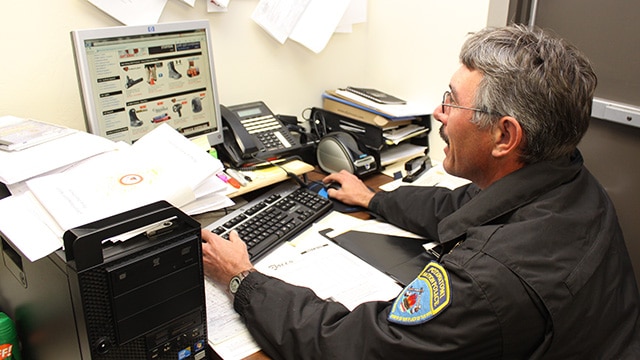 These crimes often occur in rural areas or on reservations, which are areas where law enforcement resources are extremely limited or confusing. According to federal reports, less than 3,000 tribal and federal agents cover more than 55 million acres of Native American territory in the United States.

According to the National Indian Gaming Commission, the United States is home to nearly 500 gaming facilities, owned and operated by tribes, bringing in of millions of dollars in revenue. The increased number of gaming facilities, the diversification of tribal businesses on Native American land and the limited resources of federal and state agencies to protect those businesses has shown that there is a need for tribal police departments.

“We have to secure our properties and make sure employees, tribal members and people in our community feel safe at work and out in the community,” said Sheila McDaniel, assistant director, CPN Police Department. “Our officers focus on patrolling the community and building relationships. That has been crucial to crime prevention and criminal prosecution.”

The police department employs six dispatchers who are the “key to life” for the patrolling officers. Dispatchers take calls, direct officers to emergency situations, and check tags and drivers licenses on traffic stops as well as track officer locations whether they are on a call or patrolling.

More than 20 officers patrol the 900 square mile tribal jurisdiction, with a focus on tribal property and land. The CPN police department is one of only four police departments serving all of Pottawatomie County.

“A big part of what we do is prevention and community policing,” said Dr. James Collard, police chief, CPN Police Department. “It’s our responsibility and focus to protect property and to protect lives.”

“Our jurisdictional boundary overlaps county and state lines,” said Lee Minick, detective, CPN Police Department. “Sometimes the county can’t handle the crimes that occur on tribal property, so we handle the investigation and then give it to the district attorney to prosecute.”

Federal grants and special allocations from the tribe have allowed the police department to keep technology, patrol cars and equipment up to date.

The CPN Police Department is frequently the first responder to a crime, traffic accident or emergency situation. It’s crucial that they have the means to communicate with each other and with county law enforcement. A recent purchase of 800mghz radios has allowed them to have an instant line of communication.

Another recent purchase was ODIS, or the On-line Directives Information System, which allows them to keep track of response times, investigations they’ve helped with and crimes they’ve responded to.

“This system helps us to see patterns in crime in our community and adjust our staffing and patrols to accommodate the need,” said Major Jodi Opela, CPN Police Department. “It’s also justification for our federal funding and for us being here. We help ease the burden on the other police agencies in the county.”

Perhaps the biggest tool for these officers is the training they are required to have. Every officer is CLEET certified and required to visit a gun range at least three times per year. Those standards exceed the minimum standards for the State of Oklahoma.

The CPN Police Department focuses on prevention of crimes, rather than response to crimes. Through patrolling and community policing, the department has been able to make an impact in the community.

“It’s impossible to put a value on the prevention of crime,” said Collard. “We try to anticipate and get in front of a potentially dangerous situation. It’s better to keep violence from happening then to try and respond to it.”

The police department also helps with community outreach. At least twice per year they use the Identikit system to create an information database for parents. Parents can have photos, video recordings and fingerprints put on a disk in case their child is ever lost or kidnapped. Police officers also visit rural high schools to demonstrate the dangers of drunk and distracted driving.

Police officers are trained in emergency management and emergency response. That training is crucial every day as first responders and even more critical in the event of a natural or manmade disaster.

Recently, CPN Police Department was able to provide equipment and manpower to the City of Tecumseh after tornadoes devastated the area. Officers used equipment from the tribe to patrol roads that were blocked by debris and power lines.

“The response from the community has been positive,” said Collard. “We are here to maintain order, keep people safe and protect property.”

Citizen Potawatomi Nation is a driving force in Shawnee, Okla. The tribe has many businesses in the community, bringing in thousands of guests per day. The CPN Police Department has made sure that those visitors, as well as employees and residents, feel safe.