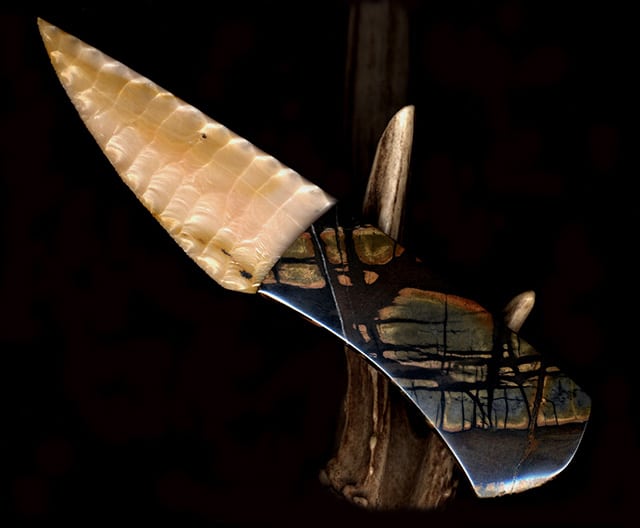 In the early 1990’s most of the world was focused on new technology and the turn of the century, but Dale Cannon was looking back at the Stone Age. After happening across an arrowhead, Cannon took an interest in flint knapping.

That moment is one that changed Cannon’s life.

“Flint knapping is important because it’s part of our culture and heritage,” said Cannon. “This is the first technology we ever came up with and it was used to keep us alive.”

Cannon has turned his passion into a thriving business, selling stone knives, arrowheads and spear tips. His knives and his knowledge of the craft have earned him many awards during his career.

“When I began flintknapping I wanted to become the very best I could be at it,” Cannon said. “The longer I’ve done it, the better I’ve become. The process is tedious, but the results are gorgeous and often stir all kinds of emotions.”

Cannon has created knives for one of the largest knife companies in the world, worked with PBS and he even helped create a permanent flint knapping exhibit at the Smithsonian’s National Museum for the American Indian. His most recent achievement is being a featured artist in Native Peoples Magazine.

As an artistic consultant for the Smithsonian Institute, Cannon helped set up the stone-point tool collection. Some of his original work is part of the exhibit as an example of modern-day flint knapping. As part of the display, a video of Cannon explains modern and ancient techniques of how flint knapping is done.

Cannon has been called upon to teach flint knapping, consult on art projects and by others in the business for guidance and inspiration. He has helped to shape the way that stone knives are created and marketed. His influence can be seen throughout the flintknapping community.

“Don’t let anyone tell you that your ideas won’t work. There are no rules in art so take advantage of it,” said Cannon. “Do what your mind imagines, if you think of something that hasn’t been done before, do it, and if you excel at it, it will take you light years.”

Flint is a hard stone used to make tools and weapons for hundreds of thousands years. Knapping is flaking off bits of the rock or stone by striking it with a tool to create the desired shape. The knapping or chipping creates unique ripples in the stone called flake scars. A variety of materials can be used for knapping — jasper, agate, flint, opal and obsidian.

Cannon’s knife blades are knapped and the handles are ground and polished. The handles are usually made of marbles, calcite, wood or bone. His products can be purchased be visiting www.modernstoneageart.com or www.flintknappers.com/dale cannon.