Tyler Bray gets to start at Memphis 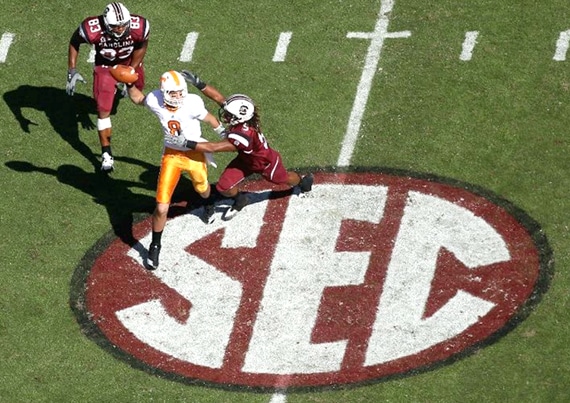 KNOXVILLE, Tennessee – Citizen Potawatomi Nation member Tyler Bray’s Monday morning – November 1 – started like any other. The 6-foot-6 Californian got up, ate breakfast, and went to classes on the University of Tennessee campus. However, this particular Monday changed immediately after his sociology class, though.

Bray was pulled aside on his way out the door and told coaches wanted to see him immediately. “Am I in trouble?” the freshman quarterback asked. On the contrary, after throwing two touchdown passes in the second half on Saturday, October 30 to tie the score at South Carolina, Bray was told he will start this Saturday’s game at Memphis.

“I feel the same. I’m just going to go out there and have fun playing backyard ball,” Bray said after Monday’s practice at Haslam Field. “It’s a little nerve-racking, but it’s still just football. You’ve just got to go out there, and the line still has to block, the receivers still have to catch the ball, and you’ve still got to throw it. … It’s all the same.”

And big-armed Bray is always the same. That’s one of the reasons coach Derek Dooley feels good about starting him. Dooley told Bray he was starting and said he needed to administer the game properly, control the huddle, take control of the offense, speak authoritatively, and move the ball without taking sacks. “I said, ‘Yes, sir,’” Bray said. “That’s my normal response.”

Dooley agreed with that. “He handled it like he handles everything I tell him: ‘Yes, sir,’” Dooley said, mimicking Bray’s soft voice. “I could tell him, ‘Tyler, your house is burning up,’ and he’d say, ‘OK. I think I left a couple of things in there.’ It’s a little bit of an issue with the snap count and calling the play, but that’s a good quality of his.

“We’ll see how he handles it this week. I just think it’ll be business as usual. He’s going to get in there and take the first snap instead of the second one.”

Matt Simms, a junior college transfer who started UT’s first eight games, was benched despite completing 10 of 13 passes at South Carolina for 153 yards, one touchdown, and no interceptions. But Simms’ tendency to hold onto the ball too long in the pocket has caused several sacks and a few turnovers, including two at South Carolina. It’s difficult to blame Simms for the first one – sophomore left tackle Dallas Thomas was simply beaten on the play – but the second one was a clear case of keeping the ball too long.

Dooley said Monday’s decision was made simply because “I just feel like that’s the best thing for our team right now. … Without going into too much detail, you know, the facts are the facts,” Dooley added. “We’ve won two games. Even though we showed some signs of doing a lot better things against a good team last week, we have a lot of sacks and turnovers. That’s not to say it’s Matt’s fault. But we just feel like we need to change things up to eliminate some of the bad plays that are happening.

“When you have the number of sacks we’ve had, and the turnovers, even an extremely deep, experienced, talented team would be losing. We can’t afford to have anything like that. When you have this many sacks, it’s hard to say it’s one thing. But the fact of the matter is we’re having it. And the first place you always turn to is the quarterback.”

Dooley said the decision had “nothing to do” with Simms’ derogatory comments that indirectly pointed fingers at specific teammates after the South Carolina game. “It’s strictly a business evaluation of our team and where we need to go,” the coach added.

Simms has approached Dooley and several teammates individually the past few days to apologize for his comments, and he apologized publicly after Monday’s practice. “I kind of just want to apologize for the way I acted after the game,” Simms said. “By no means was I trying to call out anybody on our team. I was just disappointed that we lost and kind of disappointed at how everything played out. That was inappropriate of me, and I’ve talked to numerous people on our team and just discussed my feelings about the situation. Everything is good now. I talked to Coach Dooley about the decision, and I respect his decision and respect him as a coach and as a staff. … Now it’s my job to just be prepared for no matter what happens.”

Dooley adamantly defended Simms several times Monday afternoon. “Matt’s a team guy, Matt’s a high-character guy, [but] Matt’s a competitor, and Matt’s emotional,” Dooley said. “He was very apologetic for what happened after the game, and I really respect the fact that he came to me and said that.

“I wouldn’t expect a quarterback to be happy about getting pulled out of a game. But I do believe that he’ll be a great team player, and we’re going to need Matt. I told him that. It’s not necessarily that Tyler has done everything he should do to earn a spot. It’s just that’s the decision we’re making, and it may be four series into the game or three series into the game that we’ve got to go to Matt. … We’ll just let the game dictate that and see how Tyler handles the starting role.”

Several of Simms’ teammates said they accepted his apology and had moved on from the matter. “He got a little emotional. That’s just part of the game,” Thomas said. “But he’s still my teammate, and I’m still behind him, 100 percent, no matter what. Sometimes you just have to let things go. I know he didn’t mean what he said. … It’s OK. It’s all good. I’m still going to block as hard I can for him. When he’s in the game, he’s my quarterback.”

Senior defensive end Chris Walker, Simms’ roommate, said he wasn’t sure what he’d say or do in a similar situation. “It’s a difficult thing for an older guy to go through,” Walker said. “If you’re playing well and you get taken out, it’s an emotional thing. His emotions came out and got the better out him, and it happens, but the important thing is he said he was sorry, and that he knows that’s not the way he was supposed to be acting. … We’re all good. We’re a family.”