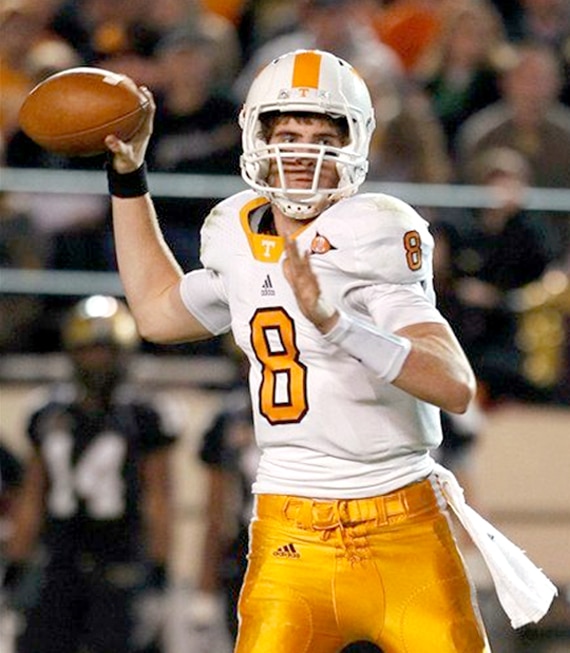 NASHVILLE, Tenn. – Learning on the job is getting a little more difficult for Tennessee quarterback Tyler Bray. The freshman Tennessee University quarterback, a Citizen Potawatomi Nation member began his career as a starter with two smashing wins. But, on Saturday November 20, he struggled for the first time. Still, he guided the Volunteers to their third straight win for the first time since 2007 and kept the chase for bowl eligibility alive with a 24-10 win over Vanderbilt. “It was just a bad night,” a disappointed Bray said.

Bray completed nine of his first 10 passes and put the Volunteers (5-6, 2-5 Southeastern Conference) up 14-0 over the Commodores (2-9, 1-7) midway through the second quarter with two touchdown passes. But after leading Tennessee to 102 points in wins over Memphis and Mississippi by throwing for 648 yards with eight touchdowns, he threw his first two interceptions as a starter.

That stalled Tennessee’s offense, requiring a late touchdown run from Tauren Poole, set up by a failed onside kick, to clinch the win and send Vanderbilt to its sixth straight loss. “Tyler struggled with his decision-making, and you have to give Vanderbilt a lot of credit for that,” Tennessee coach Derek Dooley said. “You have to give our team a lot of credit. With all the mistakes, we still held them to 10 points and found a way to win, and that’s all that matters.”

Poole’s 28-yard scoring run untouched off left tackle on fourth-and-2 with 1:11 left gave him 99 yards and the Volunteers their fifth straight win over the Commodores and the 27th in 28 games. That scuttled a Vanderbilt rally that was too little, too late. The Commodores haven’t won a home game in the series since 1982 and struggled with offensive consistency much of the night.

Vanderbilt blew several opportunities to keep it close with a missed field goal and a blocked field goal in the first three quarters. The team got moving late when coach Robbie Caldwell replaced starting quarterback Larry Smith with Jared Funk. But the Commodores lost two more scoring chances when a wide receiver stepped out of bounds before catching a touchdown pass and Funk threw an interception at the goal line.

Smith completed 11-of-27 passes for just 76 yards, and overall, Vanderbilt’s quarterbacks were 20 of 41 with two picks, continuing a trend of completing less than 50 percent of their passes. “It was very frustrating,” Caldwell said of the offense. “They are working as hard as they can. Sometimes we get out-athleted, sometimes we don’t throw it, sometimes we miss assignments. … It’s all part of the game. Obviously we were struggling throwing the football and had a hard time catching it.”

Bray, who hit 16 of 27 passes for 232 yards, opened the scoring with a 15-yard touchdown pass to Justin Hunter in the first quarter and a 20-yard scoring pass to Denarius Moore. It looked like a rout might be in Vanderbilt’s future when Prentiss Waggner intercepted Smith at the Vanderbilt 32. But, Bray killed that drive and the next with his first interceptions as a starter, snapping his streak of 96 straight passes without a pick. He had trouble connecting with his receivers the rest of the way, leaving the Volunteers vulnerable to a rally.

Bray is the latest in a line of freshmen who have had success as Tennessee’s starting quarterback. He’s one of five freshmen to start for the Vols since 1994, when Peyton Manning began his career in Knoxville. Bray, now 3-0, has held his own with Manning (7-1), Casey Clausen (6-0), Erik Ainge (4-2), and Brent Schaeffer (3-0), but he knows he’s got work to do if he wants to guide Tennessee to the postseason.

His teammates saw little to worry about, however. “I hope you all don’t expect the guy to be perfect,” Tennessee receiver Gerald Jones said. “Every quarterback throws an interception. Yeah, he showed signs of youth, but then again, he still made plays that he normally makes. The guy is not going to be perfect. He is not Peyton Manning. He is going to make freshman mistakes sometimes and he is going to make bad decisions. It is just part of the game.

“Bray wasn’t the only problem for the Vols, though. The running game wasn’t very effective, averaging 3.8 yards per carry. And Tennessee also lost a touchdown when defensive tackle Malik Jackson’s late hit on Smith wiped out Gerald Williams’ interception return for a touchdown. “We made enough mistakes today to last us for a season,” Dooley said.

Through the Vanderbilt game, Bray’s statistics look like this: 78-of-141 passing for 1183 yards, 12 TDs, and five interceptions. Against Memphis, Bray set all-time Tennessee records for a half when he threw for 303 yards and five TDs in the first half.