Native Americans Continue to Smoke Cigarettes at a High Rate 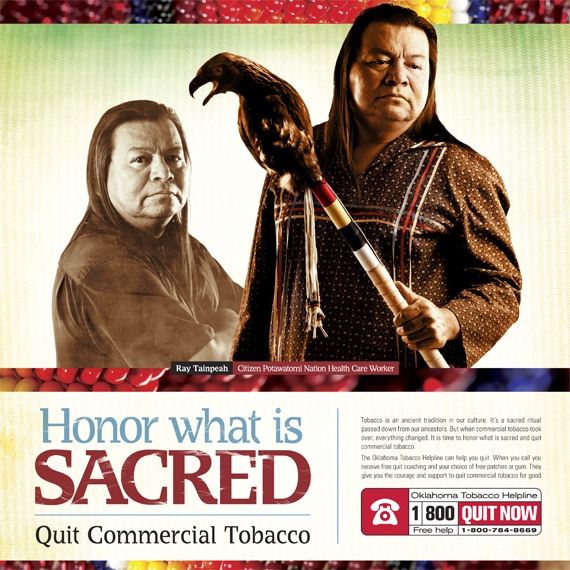 With the latest research estimating that nearly six million people worldwide will lose their lives to tobacco in 2010, EX takes an innovative approach to helping the 46.6 million Americans who smoke to finally quit. The free, evidence-based tools help smokers quit, including information that can help them prepare for a quit attempt by “re-learning” their life without cigarettes. “Native Americans continue to smoke at a high rate,” said Cheryl G. Healton, DrPH, President, and CEO of Legacy(SM), “and it is an extremely difficult addiction to end. It’s important that Native Americans who do smoke are provided with quitting solutions. EX is a free resource created by and for smokers, and I am confident that it can help Americans re-learn life without cigarettes.”

Most smokers in America – more than 70 percent – want to quit. But in 2009, only about five percent of smokers were successful in quitting long-term. For smokers committed to quitting, the EX Website (www.BecomeAnEX.org) provides a free comprehensive quit plan with tools and information that can help them form their own individual plans. The Website serves as a convening point for smokers who want to quit and collaborate on their successes and challenges with others going through the same struggle.

Since March 2008, when the program first debuted, more than a million people have visited the site, and more than 22,000 smokers have joined the online community, forming more than 300 customized support groups for smokers. EX tools were designed in collaboration with the Mayo Clinic and with input from former and current smokers who have lived with this struggle, in order to provide smokers with a realistic approach based on evidence-based research.

[Legacy recognizes and honors the fact that tobacco has a sacred cultural place in American Indian life in parts of North America.  Many Native American tribes use tobacco for spiritual, ceremonial, and medicinal purposes.  Legacy, therefore, distinguishes traditional, spiritual, and medicinal use of tobacco from its commercial use. Legacy promotes tobacco control efforts that are not geared toward targeting traditional tobacco. Legacy only supports programs and activities designed to address the issue of manufactured, commercial tobacco use in communities including Native American Indian communities in the United States.]

EX® is a collaborative public health campaign presented by the National Alliance for Tobacco Cessation, a partnership of the nation’s leading public health organizations and states. The campaign helps smokers prepare to quit and guides them to useful resources that foster successful quit attempts including the EX plan, a free personalized quit plan available on the campaign’s website www.BecomeAnEX.org.

EX is the culmination of several years of research and testing, combining an understanding of the power of nicotine addiction with messages that resonate with and motivate smokers toward behavior change. The EX approach is peer-to-peer and focuses on “re-learning life without cigarettes” by encouraging smokers to think differently about the process of quitting.

The campaign, which began airing nationwide in March 2008, includes television, radio, online, and out-of-home advertising. The EX website helps smokers create their own individual plan to quit and connects them to a virtual community of other smokers where they can share stories and strategies about quitting. Founding members of the NATC include numerous states and the American Cancer Society, the American Heart Association, the National Cancer Institute, the American Legacy Foundation, C-Change, The Robert Wood Johnson Foundation, the Association of State and Territorial Health Officials (ASTHO), and clinical partner, the Mayo Clinic.