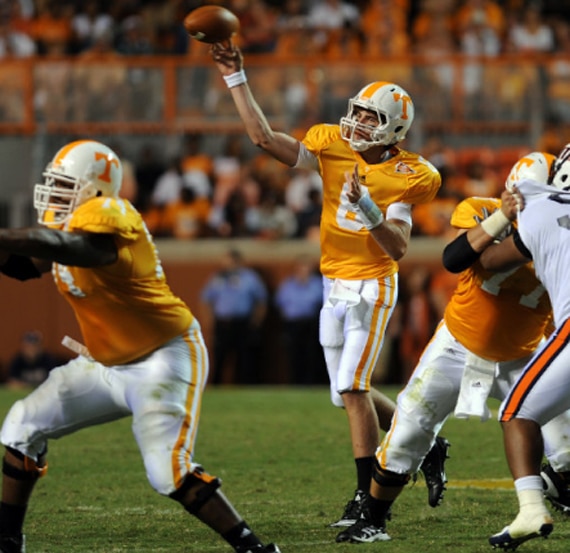 Bray saw fourth-quarter action in his debut; he hit three-of-six passes for 24 yards and tossed an interception. With a 50-point lead, Vols coach Derek Dooley had Bray refrain from throwing a lot of passes. When he was asked Monday why he didn’t have pure freshman quarterback Tyler Bray slinging it all over the field in the fourth quarter, Dooley replied, “I just didn’t think it was right to throw the ball. … I just didn’t think that was the right thing to do as a coach.”

Simms, a junior who transferred from a junior college prior to this season, was 14-of-24 for 181 yards and a touchdown. That touchdown covered 42 yards to Denarius Moore.

Tennessee’s second game of the season kicks off at 7:00 p.m. Saturday as they host the 1-and-0 Oregon Ducks. The game will be televised on ESPN2.

Meanwhile, back in Bray’s hometown, Kingsburg, California, his younger brother Austin took over Tyler’s starting quarterback role for the Vikings. But, injury has interrupted his season. Bray, a junior, went down with a dislocated wrist and broken left hand. KHS Coach Dave Steele said Bray will see an orthopedic surgeon and that estimates have him out six to eight weeks.

Kingsburg standout running back/safety Garrett Steele might be on the verge of a switch to quarterback following his gutty performance behind center in place of injured starter Austin Bray during the 20th-ranked Vikings’ season-opening 19-to-15 win over host San Luis Obispo High on Saturday.

With Kingsburg trailing, in possession of the ball on its own 20, and just five seconds remaining in the game, Steele engineered a miracle TD play. After a mad scramble that saw him almost sacked in the end zone, Steele uncorked a pass — while on the run and against his body — that traveled 40 yards in the air. Taylor Abernathie caught it at the opponents’ 40-yard line, got a block from Zach Bethel, and ran the rest of the way for an 80-yard touchdown on the game’s final play that lifted Kingsburg to an improbable victory.

“I’ve been coaching 16 years and we’ve had big plays where we’ve come back to win, or made a pick to win or kicked a field goal to win, but you don’t think you are going to win when you are on your 20 with 5 seconds left,” said Kingsburg coach Dave Steele, Garrett Steele’s uncle. “I don’t know if we could ever do that again.”

CPN member Charles Emert and his Furman Paladins teammates are preparing for their season-opener at home against Colgate at 2:00 p.m. on Saturday. Emert is a freshman center who made All-State following his senior season at Statesboro, Georgia High in 2009.