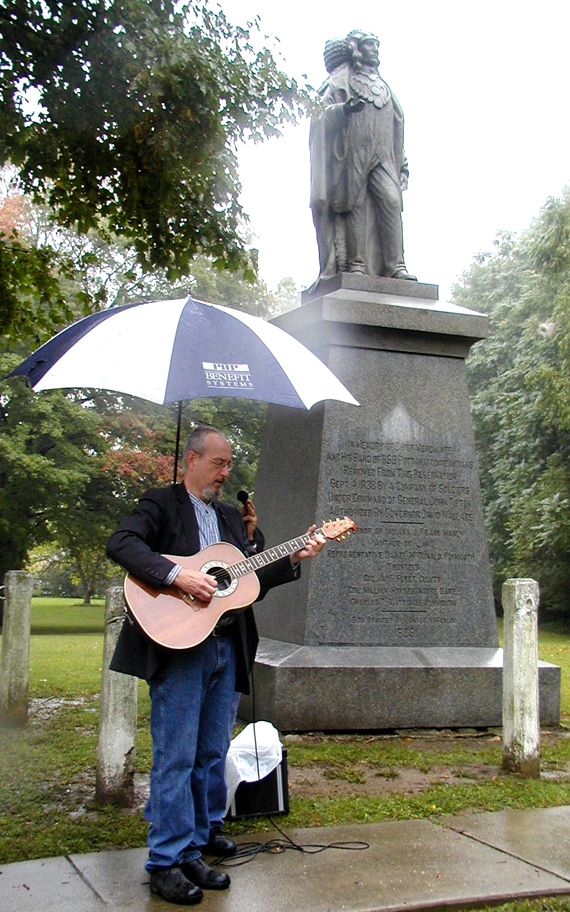 (At the beginning of the 2003 Trail of Death Commemorative Caravan, George Schricker sings his song about Chief Menominee, with the statue of the chief in the background.)

A new historical marker that marks the location of Chief Menominee’s village site will be dedicated September 17 at 4:30 p.m. at the Menominee statue site. Tylor Borggren, Plymouth, Indiana resident, has worked all summer on a project to earn his Boy Scout Eagle Award and preserve local history. A member of Troop 251, he and the other scouts and their parents have worked at three sites that needed attention: Menominee’s chapel monument on 12th Road, the Trail of Death sign at the intersection of Indiana 14 and 12th Road, and the Menominee statue on Peach Road.

Tylor is a freshman at Plymouth High School. He is the son of Kent and Sherri Borggren.

Borggren contacted Shirley Willard of the Potawatomi Trail of Death Association, in Rochester, Indiana, for ideas. She suggested he contact Professor Mark Schurr to learn the location of Menominee’s village as determined by Schurr’s archeological digs and research in 2000-2002.  Evidence indicates the village was located about two miles southeast of the statue in the Wolf Creek neighborhood. The site is on private property, but to prevent encouraging trespassing, the marker has been placed beside the Menominee statue.

The scouts and their families removed the overgrown shrubs, cleaned the boulder and plaque for Menominee’s Chapel, and made a limestone walk way from 12th Road. They cleaned and repainted the Trail of Death historical sign on Indiana 14 and 12th Road.

The public is invited to the dedication. George Godfrey, a Citizen Potawatomi Nation member who had ancestors on the Trail of Death, will conduct the dedication with a traditional ceremony. Godfrey lives at Athens, Illinois. A former professor at Haskell Indian Nations University, Lawrence, Kansas, he attends the Trail of Courage Living History Festival every year to be the emcee at the Indian dances. The Trail of Courage will be held on Saturday and Sunday, September 18 and 19, in 2010. Hours are from 10 a.m. to 6 p.m. on Saturday and 10 a.m. to 4 p.m. on Sunday. It will be held at the at the Fulton County, Indiana Historical Society grounds, located four miles north of Rochester on US 31 and Tippecanoe River. Admission is $6 for adults and $2 for children ages 6 to 11. It is free for children 5 and younger.

The dedication of Menominee’s Village monument is free, and the public is invited. George and Michelle Schricker, Plymouth, will sing the song he wrote about Menominee.

The annual meeting of the Potawatomi Trail of Death Association will be held at 7:30 p.m. on September 17, 2010 in the Fulton County Museum.