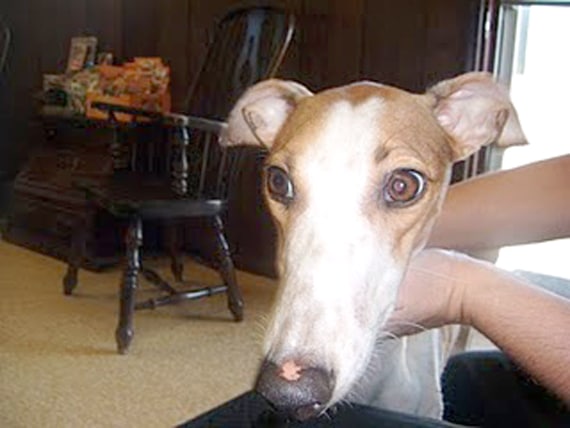 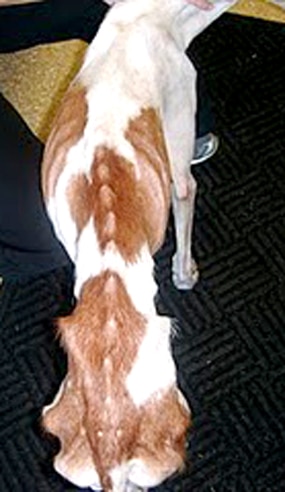 (Meet Sweetheart, a few days into her recovery)

CPN member Jessica Lantagne, who lives in the Shawnee, Oklahoma area, is one of the founders of a greyhound rescue group, Fasthound Greyhound Adoption (www.Fasthound.org). On Friday, August 13, 2010, Fasthound members rescued Sweetheart, a greyhound in Chickasha, Oklahoma who had been severely mistreated. Lantagne has set up a blog at http://sweetheartsstory.blogspot.com to tell the greyhound’s story, allow people to follow and assist with her recovery, and spread the word about the need to rescue greyhounds.

Sweetheart was seized by Chickasha Oklahoma Animal Control Officer’s Thursday, August 12, 2010. Sweetheart had been tied to a tree with rope and a plastic coated chain behind a house in Chickasha. She was left without food and water and with little in the way of shelter.  The homeowner then moved to another town with her boyfriend and did not give Sweetheart another thought.

Animal Control was called in by a hysterically crying relative of the homeowner’s who found Sweetheart near death from starvation with the rope and chain wrapped tightly around her back leg. An officer responded to the house, immediately realized Sweetheart’s desperate situation, and called for another officer to assist her. With the help of a neighbor’s bolt cutter, they freed Sweetheart from her bonds. Only then did they realize that both the rope and the plastic covered chain had rubbed a wound on both sides of the leg down to the bone. As they examined the wound on the scene, maggots began pouring out of it. In addition to being extremely emaciated and having a leg with an exposed bone covered in maggots, Sweetheart was covered in literally thousands of fleas.

Since then, Sweetheart has been receiving loving care at Prague, Oklahoma Veterinary Clinic. Lantagne says, “What a difference a week can make!  I talked to Dr. Kolar’s office this morning (Friday, August 20) and Sweetheart had just gotten through, in Dr. Kolar’s words, ‘inhaling a can of puppy food.’  Sweetheart is moving around well this morning, is in good spirits as always and is steadily improving in overall health and appearance.”

Lantagne says efforts to help Sweetheart are spreading. Some wonderful volunteers are distributing donation buckets around the Oklahoma City Metro area.  The buckets have Sweetheart’s shelter picture on them and a brief description of her story.  The following businesses are participating in the donation bucket drive and I want to thank them and recognize their generosity for allowing those buckets to be placed in their businesses: Central Park Doggie Daycare, House of Design Gallery and Salon, Barking Dog Bakery A-1 Pet Emporium, all in Oklahoma City, Gentle Care Animal Hospital in Edmond, Oklahoma, and Paws Around Town located in Northpark Mall in Oklahoma City.”