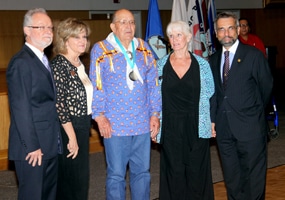 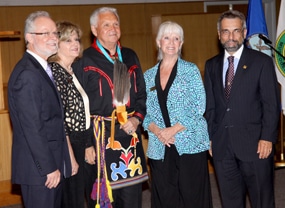 (Above left and right, respectively, CPN elders Leon Cross and Alan Kelly pose with AARP officials after receiving their medallions as Honored Oklahoma Indian Elders. Below left, Mr. Cross opens the festivities with a prayer delivered in the Potawatomi language. Below right, CPN employee Leslie Deer (Mvskoke) dances at the AARP event as part of the Oklahoma Fancy Dancers.)

Citizen Potawatomi Nation elders Leon Cross and Alan Kelly were among 50 Native American elders whose accomplishments were highlighted by the American Association of Retired People (AARP) Oklahoma chapter at the National Cowboy Museum on the evening of Monday, August 30. 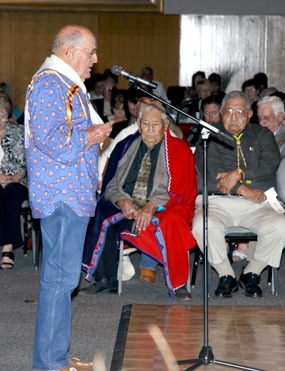 The AARP’s program for the evening’s celebration outlined Mr. Cross’ achievements in these words: “His Indian name is Was gishek (Bright Sky). A dedicated volunteer at the Potawatomi Annual Festival, he is often found teaching young tribal members how to make bows or helping to set up and judge the annual archery contest that he helped start with his son. At the age of 80, he began to study the Potawatomi language and has since become quite fluent. He can now deliver invocations in the native language. He is an example that a person is never too old to start something new, most recently having participated in his first sweat lodge. He is an inspiration to Potawatomi tribal members and everyone he meets.”

Mr. Cross delivered an invocation in Potawatomi to open the festivities at the AARP event.

Of Mr. Kelly, the AARP program says, “His tribal name is “Knotko” (Low-flying Eagle.) After retirement, Mr. Kelly returned to Oklahoma where he immediately got involved with efforts to understand and preserve cultural histories. He has devoted himself to learning his native language and ceremonies so they can be passed on to future generations. He makes traditional medicine pouches and wooden pieces for feather fans which are given to family members for Potawatomi ceremonies. Alan is a member of Sustainable Shawnee, which promotes environmental sustainability, where he exhibits his deep respect for the environment.” 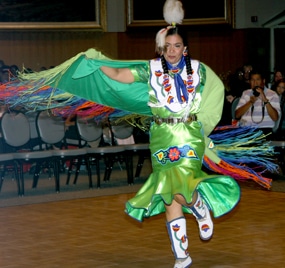 “This is the second year that we have honored older Indians who are living examples of what makes Oklahoma a great place to live,” said AARP/Oklahoma Volunteer State President Marjorie Lyons. “It was exciting to hear the stories of last year’s honorees, and was equally exciting to hear how the 2010 honorees have left their mark on their tribes and the state.”

Lyons said the goal to have at least one honoree from each of the 38-federally recognized tribes headquartered in Oklahoma was met.