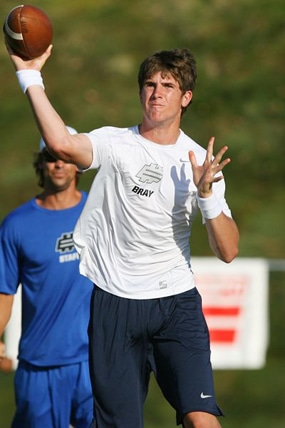 After an up and down spring, the Tennessee University Volunteers left many questions to stew over during the summer and to be answered in fall practice before the 2010 season. Citizen Potawatomi Nation member Tyler Bray, a freshman quarterback at Tennessee, is at the center of one of Website Bleacher Report’s feature Tennessee Volunteers Football: The Five Biggest Summer Challenges.

Many of the new four- and five-star recruits who were leftovers from departed head coach Monte Kiffin’s one recruiting class or are recruits of new Vols head coach Derek Dooley did not participate in spring drills. Bray and his family moved from California to Tennessee so he could.

There were also injuries to key contributors like NFL-ready tight end Luke Stocker and sixth-year player Nick Reveiz, who was the heart and soul of the linebackers a couple seasons back.

The non-conference game against Oregon could be a possible upset for the Vols because Oregon’s multi-talented QB Jeremiah Masoli has been dismissed from the squad. However, this spark of optimism is just a small light among the questions about the 2010 edition of the Vols.

Tyler Bray is definitely a tall, skinny dude (6’6″) with a cannon arm (200 yards, 2 TD in spring scrimmages). Recruiting analyst Barry Every says that Bray needs to grow into his body, but he can make all the throws with a surgeon’s precision. Tennessee fans hope Bray can play like this against SEC defensive backs.

Most preseason football magazines, like Athlon and Phil Steele, have Matt Simms, son of retired NFL quarterback Phil Simms and a junior college transfer, slotted as the QB starter. Simms has a good arm and played well in junior college but was sacked five times in spring. Simms’ release and Bray’s body mass are question marks that linger after the spring. If either of them improves on these weaknesses, he will start.

Right now, Bray should start because he flat-out gets rid of the ball faster (two sacks to Simms’ five). Simms has slightly better speed, but in this rebuilding year Coach Dooley should take his chances with the true freshman.

Bleacher Report pinpoints these as the other question Tennessee needs to answer affirmatively to have a successful 2010: Is middle linebacker Bryce Brown going to return? Can the late enrollees make an impact? Who will win the kicking job? And, who will step up and be the team leader?

Read more of the discussion about these Tennessee Vols issues at http://bleacherreport.com/articles/410839-five-biggest-summer-challenges-for-tennessee-football.